Can anyone tell me when the front and rear cameras on Pinephone Pro are likely to be supported by Manjaro Phosh? What about the Pinephone finger print scanner case? Is there a website somewhere that advises what features are priorities, and how they are progressing? Am keen to use PPP as a daily driver.

Since posting, I foudn this Github project, which shows which “issues” the devs are working on. 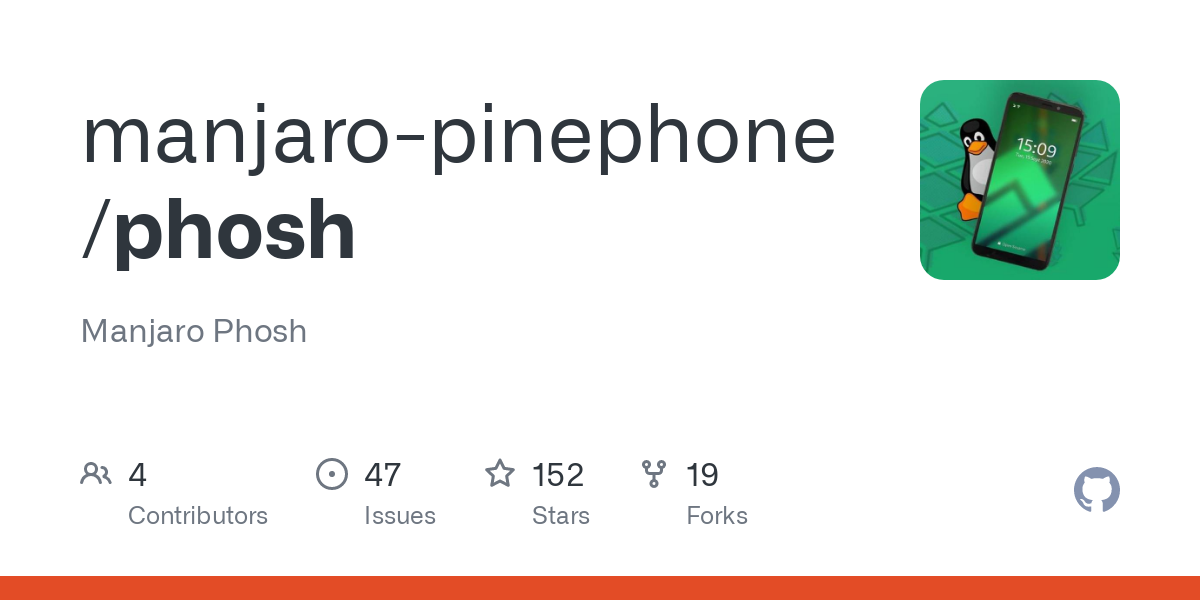 Manjaro Phosh. Contribute to manjaro-pinephone/phosh development by creating an account on GitHub.

I’ve added cameras and fingerprint scanner support as issues to address.They weren’t subjects of open tickets, so I suspect they are not progressing at this stage. Hopefully my issue report with spur them along.

See the Pinephone-Pro as a developer platform. You have a more or less FOSS friendly hardware you can do projects on, like the RasberryPi - just in a phone form factor. Getting it daily-driver ready might take while.

A good starting point for information would be the Pine64 Wiki, which includes infos about the PinephonePro, its Accessories and the Keyboard case. Each of them can be seen as separate projects. Some developers like the Kernel Developer Megi keeping track on their progress in personal logs or you follow a more mainstream oriented blog like TuxPhones.

The PostmarketOS project have a wiki page, which includes the status of supported hardware so far. And the Pine64 blog gives monthly updates what is going on in Pine64 community in general.

There are no priorities on when what get’s supported.

Getting the Cameras to run is kinda complex. The hardware was chosen with existing Linux drivers in mind. However, the communication between the SoC and the controller for the Cameras is not yet given. There is some effort happening for the 5.18 Linux kernel as found for example here, but not all needed pieces are there yet.

And Phosh is more or less another project regardless of the PinephonePro, as it works also for Librem5, Pinephone and other TuxPhones. Development-wise the Gnome Gitlab gives a clue what is worked on there.

We might comment on your issues you posted to our gitlab, but don’t expect a fast solution, as we can’t pinpoint when it is done …

Thanks Phil, I really appreciate the update. I hope to see some improvements soon- the full battery depletion boot/charge issue with the Pinephone Pro is a major problem and one of the main reason’s is not suitable as a daily driver at present.

Battery is also a complex topic. The whole Watt usage needs to be under 2W to get around 5 hours of battery life out of it. The baseline of RK3399 isn’t great. So if you add usage to it the SoC heats up, Sensors of the cameras might heat up, that combined will heat up the modem, which is a whole PC of it’s own, which leads to that hot sexy thing which won’t last long until the battery is discharged below zero.

So it will take a while to get the device remotely daily driver ready. Having the external charger might help to kick in some juice when that happens …

Does Manjaro w/ Phosh Beta 24 resolve the problem whereby if the PPP battery is fully depleted, it won’t charge? Doing that special boot holding the reset button and charging from a PC is a real drag. To be frank, that problem killed my intended transition from Pinephone (which was a suitable daily driver, despite its low specs) to the PPP (which has great specs, but lags in physical feature support (including battery, external keyboard case etc.)

As far as I know, the installed operating system can’t do much about the battery problem. But tow-boot seems to fix the problem. However, since the Pinephone Pro is (still) delivered with u-boot by default, tow-boot has to be installed first.

tow-boot isn’t the solution. It uses an outdated u-boot as base. These builds should enable users to live the dream of EBBR but on their phones. While u-boot works on 2022.07 release tow-boot is still at 2021.10. Battery issue is still an issue and the external battery charger is a workaround for empty batteries. Newer firmwares can be tested for the PinephonePro …