Not waking up from sleep after installing Manjaro 20.1.1 liveCD

I use a keyboard shortcut to put the computer to sleep. The problem is that after installing the Manjaro 20.1.1 iso, the computer doesn’t wake up in response to keyboard inputs, mouse clicks or movement, or pressing the power button. So I have to reboot it with the reboot button.

The same thing happens when I put it to sleep via the GUI.

I think it is because I don’t have swap allocated for this partition? I have swap allocated for the previous Manjaro Linux partition. I guess I need to allocate separate swap for this one as well? Here’s an answer; probably better to use separate partitions, and in my case it would be even better to delete the older Manjaro partition, or fix the issue that I have with it and delete the new one.

Sleep should work without swap. After suspending and then rebooting through reset, please post the output of the following command:

Also try to suspend from the terminal:

Also try to suspend from the terminal:

For suspend you don’t need swap. You have to make sure how your BIOS is set up for suspend, then on your newer install you have to check
https://wiki.archlinux.org/index.php/Power_management

Ok, sddm crashes. Please post the output of inxi -Fazy and, after a suspend/reboot cycle, the output of cat /var/log/xorg.0.log.old

I enabled virtualisation in BIOS, although I don’t need it.

I also followed these instructions:

post installation - the trick to get sp5100_tco working properly is to have it initialised first. you can do that by adding it into mkinitcpio.conf as follows. open terminal. issue the command sudo nano /etc/mkinitcpio.conf find the line that...

post installation - the trick to get sp5100_tco working properly is to have it initialised first. you can do that by adding it into mkinitcpio.conf as follows.

if you want any additional modules loaded earlier put a space between them, they can all be enclosed in the single quote marks already entered, do not add more. e.g. (sp5100_tco amdpgu)

6 b. edit /etc/default/grub.conf and remove any blacklist reference to sp5100_tco.

Now I can boot into kernel 5.8. Awake after suspending doesn’t work, however.

But it is working in 5.4, although now only one monitor wakes up.

Oops, forgot to do step 7 above.

In 5.8 it suspends but does not awake—i.e. same issue.

That was after sleeping via the GUI.

After systemctl suspend in the terminal and rebooting into 5.8, I didn’t get to the login screen. Currently there is a black screen with a cursor. CTRL+ALT+F2 does not show a tty.

I then slept via the GUI again and rebooted into 5.8 again. However, now Firefox is non-responsive (process ID: 1830), and when I try to close it, after a couple of seconds I get a warning pop up window, saying it’s not responding, do you want to terminate it, but if I click the terminate button nothing happens. kill 1830 also doesn’t close it.

Additionally, systemctl suspend suspended and then it woke up. In the login screen, there was a considerable lag with showing the password after typing it, and doing this process again after logging in, the delay was about 20 s between the login screen appeared and the password prompt showed along with keyboard input. Once more and there was no delay.

Done, and in 5.4 it suspends and awakes as expected.

Use this kernel then. After all, it is the current LTS version. If you still want to post the missing output, the “x” in “xorg” is uppercase (Xorg.0.log.old). Sorry for the typo.

The output was cut off in the terminal so I sent the output to a file and put it here:

Yeah LTS is going to be more stable, which is more important for productivity—avoiding time spent fixing issues or bugs—than having the latest features.

I think you’d be better using the proprietary NVIDIA driver instead of noveau. First check available and installed drivers:

EDIT: you can also check it in Manjaro Settings Manager > Hardware Config

Awake from suspend now works in kernel 5.8! Thanks!

I just woke up my computer just now this morning after sleeping overnight, and I had black screens with the cursor, so I rebooted via the tty. Generally speaking, I put the computer to sleep when I’m not using it. 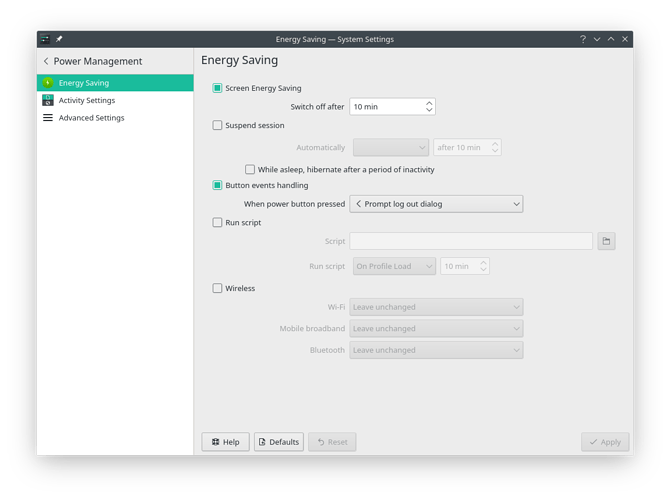 If the issue persists I’ll revert to kernel 5.4.

If the issue persists I’ll revert to kernel 5.4

I’d try that. Is there any feature you really need specific from kernel 5.8?

You can also wait a bit, to see if the back screen disappears. My desktop, for example, takes a bit to come back - though I know that’s not normal in a laptop waking from suspend. You can also try changing tty and back. On some occasions it brings the login screen back.

Yeah kernel 5.4 seems best. I’m not aware of any 5.8 feature that I really need.

I didn’t wait for long, only 10 s max, but did try to switch between tty and back. I have 64 GB of RAM, so it’s not like it should take long to restore.

The delay isn’t related to RAM. But my desktop is old anyway. It most certainly doesn’t apply to you.