No option to install proprietary driver on optimus laptop

Hello,
I’ve had this issue on my Manjaro/KDE installation with no option to install proprietary drivers (as shown in the screenshot). 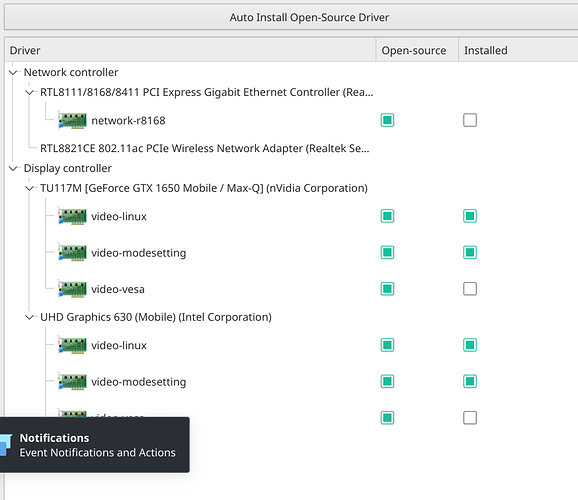 I’ve had many Manjaro/KDE installations on this laptop and I’ve always been able to install and use proprietary nvidia drivers. And I’m sure it was the same for this installation, but at some point (after some update?) I lost this option in the driver manager. All the nvidia drivers seem to be installed, but judging by performance after switching to “nvidia” via optimus-manager, it seems to me the system is using the nouveau driver to render the screen. When I booted from a live CD, everything was OK, I had the two options, but here it only sees the open source drivers. I’ve changed kernels and re-installed all the drivers in pamac with no result.

The older proprietary nvidia drivers were removed. So if your GPU isn’t supported by the new drivers, I suspect this happens.

If you wish to continue using the older, legacy driver, please see

You may be missing key packages, what is output of pacman -Qs nvidia? Do you see

Even when I switch to nvidia with optimus-manager, the driver manager shows the same.

You reboot after you re-enable the hardware?

I see already issues, you seem to have a messed up MHWD as you have inexistent old configs still installed.

But weird you also seem to have Nvidia installed

The question is how did you setup all this, with Optimus, Prime, Nouveau all together on the system?

No idea how it all got installed. I switched between kernels quite a lot, and had to install and re-install the wifi driver (from a github page because it doesn’t work with the default kernels), other than that I just regularly updated the drivers alongside all the other software with pacman.

In your place, I would make a system backup with Timeshift, then remove everything (all drivers, Prime, Optimus, Nouveau), restore MHWD to a normal state (might need removal and proper re-installation), and see if from there you can install things properly.

Not sure the exact proper procedure but if you create a proper backup with Timeshift you can always go back to the starting point, your current system state.

I think I will need a system reinstall. Might be simpler for me than playing around with those individual components that I don’t feel comfortable with. I’ve been thinking about a reinstall, but at least you’ve clarified the need for me to do this

I do it from time to time anyway, but thought I could work with the current installation a bit longer.

No I didn’t say that at all. I said you probably need to clean things up to sort things out.

If you want to reinstall the system it’s on you nobody suggested that. Also

You reboot after you re-enable the hardware?

Yes, I know. It’s totally on me, but it just made it clear to me that I might want to do that. I thought there would be a simple fix, but it turns out things are a bit messed up, so I think I’ll go for the total solution

Anyway, thanks guys, I appreciate the quick responses and readiness to help.

I used to often reinstall on Windows XP days, but with modern OS especially Linux based OS reinstall seems a bit radical to me

//EDIT: also if you’re more patient, maybe someone will come with other suggestion and simpler things to try, as each individual we are here, can not know or think of everything.

Yes, I’ll wait a bit as I will need the laptop in the coming days, so I can’t mess with it until the end of next week.
Thanks!