I know much nothing about kernels, and i haven’t got used to be asked frequently to update kernel. Has happened now twice in quite short time period. I think i saw someone said LTS is best option but i have currently newer in use than latest LTS so should i downgrade? And what should i do next time when i’m been asked to “please update your kernel?” 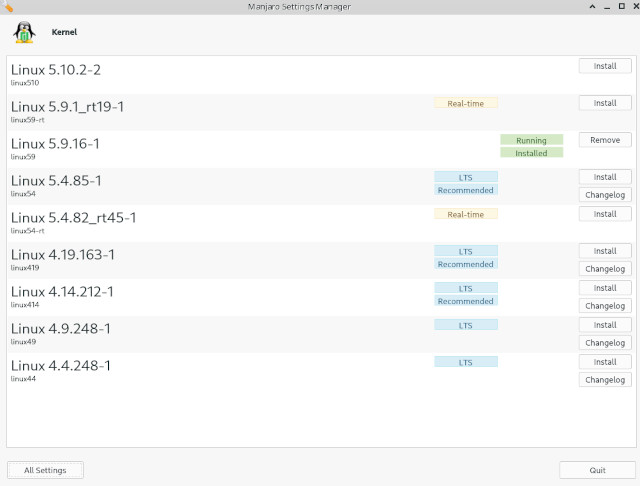 Unless you have newer hardware and would benefit from a newer kernel, I think it’s always safest to just stay on the latest “Recommended” LTS kernel. In this case, you can basically just stay on 5.4 until the next Recommended LTS is released. Set it and forget it.

By the way, 5.9 is now marked “End of Life” (i.e., no longer supported), meaning you should jump off of that ASAP and either move up to 5.10 or default back to 5.4. You can (and generally should) have at least two kernels installed, in case one doesn’t work for you.

For the record, 5.10 is currently buggy for me (no bluetooth, no idea why) and apparently many others for various reasons, hence why I’d recommend to stay on the latest recommended LTS 5.4 kernel so you can focus on actually using your computer instead of tinkering around with all this.

Also with regard to your question about what you should do when it nags you to install a newer kernel… well, on my system I have all of the boxes checked in “Notification settings” for the Manjaro Settings Manager. I’ll get that nag once (really, I shouldn’t be getting it at all, given I told it to only tell me when there’s a new LTS kernel… I suppose this really just means 5.10 is somehow “LTS” but whatever…). To make it go away, I simply open up the “Kernels” menu, do nothing at all, then close it. That has fixed the problem for me so far. Or you could just uncheck all of the boxes and be done with it altogether.

Thank you for reply and advices!

I have now second question. I’m feeling a bit confused again i was about to install that 5.4 LTS but i noticed Manjaro had couple of updates available so i installed them first, i think something kernel related. System wanted restart so i did, so now my system seems to be running on different kernel without i made the choice and even 2. kernel installed: 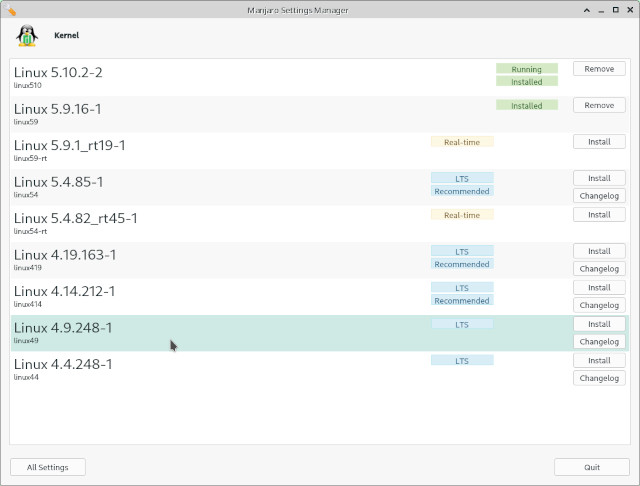 So do Manjaro has sort of automatic update setting for kernels somewhere? Or what did happen… but i suppose i still downgrade

Hmm…how do i choose which kernel is for use? I installed that 5.4 but i dont see how i can make it as default/running one?

njaro had couple of updates available so i installed them first, i think something kernel related. Syst

Kernel 5.10 is the latest release. It’s also an LTS release. So I’d generally recommend it.

LTS stans for Long Term Support, and is generally the best to choose if you do not want to live on the edge and aren’t looking for a specific feature.

But it would depend on the person’s preference as well as the usage.

Curious, why isn’t 5.10 labeled here as “LTS” in that case? Did someone forget to add that tag?

Also, @Tyven take everything I said above about 5.10 with a grain of salt. What kernel you run entirely depends on your hardware, but you usually can’t go wrong with something marked “LTS + Recommended”, at least in my experience as a casual user of this OS. 5.9 was working without a hitch for me, but since that’s EOL I have to “downgrade” back to 5.4 until they fix bluetooth on 5.10 (fingers crossed).

Curious, why isn’t 5.10 labeled here as “LTS” in that case? Did someone forget to add that tag?

I really don’t know. It IS a good question. One to which I have no answer for. I based that on this Wikipedia article that states version 5.10 is ‘21st LTS release, maintained from December 2020 to 2026’.

Only thing that I can guess is that it’ll be added later.

As @ceres said linux-latest was most probably the reason for you to get “upgraded” to 5.10. Personally I do not use linux-latest as I want to keep track of what is going on myself. linux-latest (as far as I know) automatically installs the latest kernel and also takes care of those people who did not remove EOL kernels from their systems by the time they get dropped from the repos, which would then result in issues during the update process. In short: you can choose between keeping linux-latest or keep track of things yourself.

What I would recommend is to re-add 5.4 to have a fallback onto an LTS kernel. By default the system boots into the newest kernel installed, which in your case is 5.10. If you do not have any issues with it, you can keep it, as it will be the new LTS at some point.

What you should do is to remove 5.9, as others mentioned, as it will be removed from the repos in the near future, being marked EOL. When you do that, keep in mind not to have it running at the same time.

Thank you everyone! My hardware is some years old so 5.4 could be good option but however i don’t have any bluetooth devices so i could give a try to 5.10 aswell cause it’s installed already.

I removed the 5.9 and the 5.4 is now as fallback (2. installed). If i encounter some oddities i can then try if i can get the 5.4 as default running one by removing the linux-latest package&5.10.