Can we go back to the old Add/Remove UI. New one is overly complicated.

Strangely I find that UI much easier to use. Basically - drop down menus are now side bar menus. Don’t have to scroll back and forth from the drop down box anymore.

Probably depends on the screen size and resolution. Mine is 14’’ at 1080p.

The new version of pamac was pulled again. Open up a terminal and issue…

… to downgrade pamac back to the previous version, which is now marked as the current one in the repo.

so would it be bad to keep the new version & not downgrade?
will it still be updated?

I think it won’t matter much. Personally I’ve downgraded, but only so as to be on par with the official status of the Stable repos, because I never use pamac.

I reckon the new version will come along soon anyway, but truth be told, I don’t know why it was pulled again, and I don’t think it would have had anything to do with the user interface. So maybe it is best to downgrade.

me to, barely use it, but i don’t even see pamac on the list. 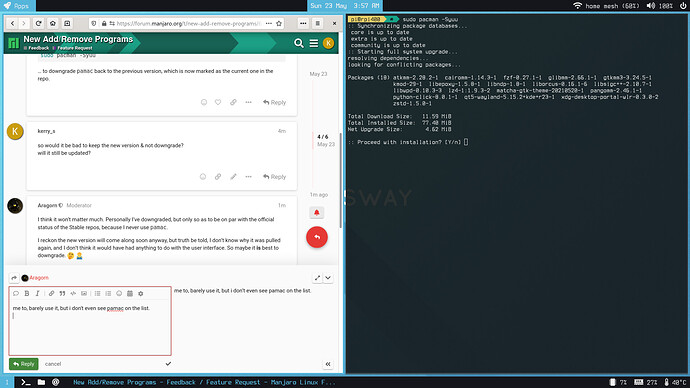 Then maybe you are already back on the old version?

Or he’s on unstable or testing branch.

That was my second thought, but it slipped my mind because I’m also busy helping out on another thread.

this is a fresh install of sway, just this afternoon. pamac still looks like the new version to me. i’m on a rpi400 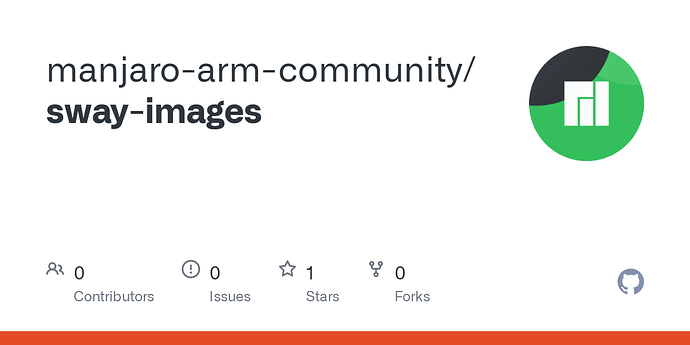 Contribute to manjaro-arm-community/sway-images development by creating an account on GitHub. 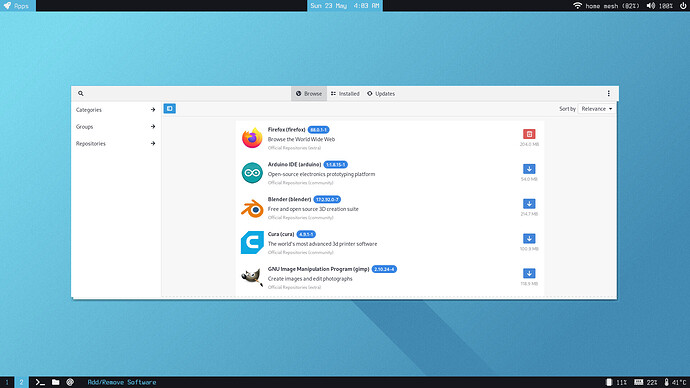 ARM has had the new version for a while now. If you want the old version, you have to build it yourself.

nope, no matter to me. i did go ahead & upgrade the rest.

How do you force the downgrade? I got this…

thanks! so much better

way too many labels/menus, old one was sleek and easy to navigate

How do you force the downgrade?

The new version of pamac was pulled again. Open up a terminal and issue…

sudo pacman -Syuu … to downgrade pamac back to the previous version, which is now marked as the current one in the repo.

What was the reason for pulling the new pamac?

I’m not sure ─ I’m not a developer ─ but there was quite a bit of backlash to the change, as you can read in the thread below…

I just noticed pamac’s new look. I hate the change. It’s unintuitive and unreadable. The biggest issue is, in the old UI there was a coloring that quickly was informing about what is installed and what is not. Now we have those black and white icons. They are not so well readable at first glance. I hate it! Try to recognize which packages are here installed in a fraction of a second! In the old UI it was easy. Now, not anymore. [Screenshot_20210503_204557]

There were also a few bug reports, such as this one…

If mouse is put at far right then you left click and try to grab scrollbar to scroll down/up it will not work and you need to position your mouse pointer exactly above the scrollbar. While other apps like Dolphin works fine [ezgif-2-1438c2e1a171]

Not sure either, as the issues discussed in that thread were for the early version of the new Pamac about readability, where icon were of similar color (all white, now red/blue), or the blue color for label too aggressive (now lighter blue), or some little UI bugs in Preferences menu (now fixed for the most part). I don’t recall anything in that thread that is an issue now in the new Pamac. Maybe they mistakenly pushed the new version to Stable when not intended as I think it was very little time on Stable.