I downloaded free “Clonezilla” drive cloning software and booted it off of a USB.
I get to below step and I don’t understand what I am doing wrong(see attached image).

I wish to clone an entire 2TB M.2 drive to an image file on an internal 4TB HDD drive.
I do not wish to lose data on the 4TB drive(there are files on it)

Any help would be appreciated, thanks!

EDIT #1: Both the 2TB M.2 drive and the 4TB HDD drive are LUKS encrypted 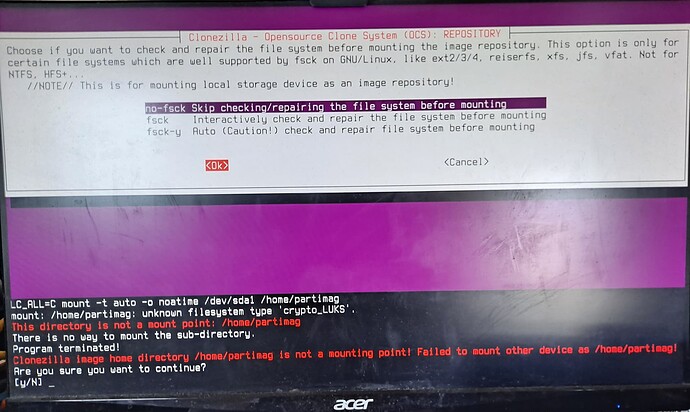 You are being asked to choose whether you want to check the filesystem that is already there on that device
to which you want to write your backup.

this drive - as you know - is an encrypted drive (LUKS encrypted)
… as the message says at the bottom of your screenshot.

You first have to open the encrypted container
which holds the actual filesystem
to which you want to write.

I guess that the clonezilla menu is not designed to deal with users in mind who want to backup to and from encrypted media.

You’ll have to open the container first
(you, yourself)
to be able
or for Clonezilla to be able
to access the filesystem on that encrypted device

Mounting yourself may not be necessary - but you need to open the LUKS container
in order for Clonezilla to see the filesystem on the devices.

This goes for the source as well as for the target.

You should definitely skip the check at this point, where there is no filesystem available yet.
If you force the check you will very likely destroy … something.

I think I have to do below:

I recently wanted to back up my LUKS-encrypted disk. However, clonezilla only offered the ability to clone with dd, rather than the faster partclone tool, which is understandable. It is, however, possible to clone the (decrypted) underlying extfs...

I recently wanted to back up my LUKS-encrypted disk. However, clonezilla only offered the ability to clone with dd, rather than the faster partclone tool, which is understandable. It is, however, possible to clone the (decrypted) underlying extfs filesystem.
Note: if you make a backup of your decrypted data, it is as bad as if you’ve never encrypted it. Take good care of your backup and, for extra security, destroy it after you have restored it.

The first thing you need to do when you load Clonezilla, is to select “drop to shell” rather than running the normal clonezilla UI. You should now be in a root shell.

Map the device as you normally would (supposing your LUKS partition is /dev/sda5):

You should now load some kernel modules:

You should now have /dev/mapper/yourdevice-vg–root or similar.
You can use the partclone tool now.

This will clone the decrypted ext4 filesystem and save it to /mnt/path-to-backup-disk.

Easier than you’d think! Once again, be extra careful with your backups, for without the encryption, your data will be compromised if they fall to the wrong hands.