My one year journey with Manjaro.

My one year journey with Manjaro.

I decided to write my own story about how my Linux journey went.

I am not new to Linux, I have tried Ubuntu and it’s flavors in the past but they never managed to convert me. Mostly it was because of gaming and games not working or pretty bad performance.

Other times, I tried to update to the latest NVIDIA driver and managed to end up with a black screen after a reboot. Tried to fix it with no luck and then I gave up and switched back.

Now, as we all now, Proton launched last year. I immediately switched to Linux to try it out and was pretty amazed about how well it worked.

My memory of that initial period is a bit hazy, and I can’t remember on what distro I tried it on, but I still ended up back on Windows but I kept my eye on Proton in the weeks after.

In November my interest to go to Linux again was back. I want to be a Linux user but gaming always hold-ed me back. But with Proton (and other projects around it) developing at a good pace and Windows being annoying in general (like having to re-apply all my tweaks again after a big service update), it was time to switch again.

I wasn't a fan of Ubuntu with my previous experiences and having to install a new version with a new wasn't my idea of a pleasant experience. I believe the advice was to always clean install a new release, although upgrades also works.

Anyway, I just wanted a distro that had updates to packages in a timely manner, especially because of video driver updates.

With some looking around I discovered Manjaro. I went with the Cinnamon flavor and off I went! I backup-ed the important data to my external drive and then I formatted all my drives and installed it.

Now we are a year on and in February I got a new full AMD PC (I had a 3rd Gen Intel Quad and a NVIDIA GTX 1080) which consists of the AMD 2700x, 32GB of memory and the AMD RX 580 which I bought for ‘fun’ to check out how the AMD GPU experience is since I heard great stories about it.

I expected to eventually put back in the GTX 1080 but the 580 worked so seamless with the open source drivers and I had a better multi-monitor experience vs that of NVIDIA that I still got that card.

Gaming wise everything is just perfect. With Steam's Proton and Lutris, I can play all the games I want. Just finished "Man of Medan" and currently doing "Life is Strange 2" and "Star Wars Jedi Fallen Order" and "A Plague Talen: Innocence".

I also took the time this weekend to figure out how to use Steam BPM on my TV again (my TV is my third monitor). This was easier then I thought, a simple script that I bound to a keyboard shortcut that makes my TV the primary display and it then launches Steam in BPM. Another shortcut and script to restore it back again to my original monitor (if someone knows how I can do this is one script, I would love to know, I wanted to make a script where if I exit Steam, the primary monitor get's changed back again but was unable to find a solution).

So now I can do couch gaming again as well!

Aside from a new PC, my Manjaro Cinnamon is still running smoothly and during my time on my old PC, I made a bash script that I used on my new PC, that I ran after installing Manjaro.

The script removes the software I don’t need, installs those that I want, copy’s over some settings of programs I use so I don’t have t reconfigure them, applies my Cinnamon system settings and adds rules to my host file for ad-blocking, and installs and downloads a theme and changes some colors in those themes, adds a border to the theme I use, since it does not have them by default.

I also got some other stand alone scripts for smalls things here and there.

So yeah, a very awesome year where I have learned a whole lot. I really love how I can get all the software I want from the package manager with the AUR included and all the stuff I have learned terminal wise is pretty cool as well.

With all that said, here is a shot of my system and how it looks with my theme for those interested.

Taskbar might look a bit dim but that is because it was fading into view when I took the screenshot (I have auto-hiding taskbar on). 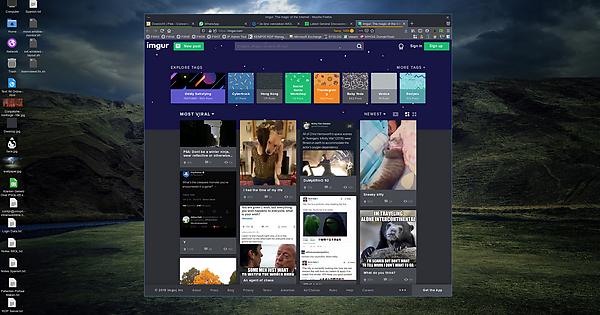 Nice story! Thanks for sharing!

How long do you use Linux ?

What do you mean by how long?

I am now full-time on Linux since November 2018. Also got it installed at my laptop at work where most of what I do is with RDP so it is a good fit.

Before that, the few times that I tried was a few day's or so, the longest was 3 weeks.

you have this working on linux?

Yes, I used the Lutris script and it worked without issues!

Edit: I also bought the game on Origin and not on Steam. Origin can now work on Steam with the newest Proton-4.21-GE-1.

its the first star wars game that doesnt suck, it's almost as if EA had nothing to do with it's creation.

i couldnt manage to get it working, and for some reason the origin client wont allow me to install games and complains of invalid path regardless of what it's set to. i even tried the cracked version of the executable to workaround using the origin client but it just sits there and doesnt launch.

i started/finished the game on windows that i keep around for such occasions, its good to know it works for you at least.

I've been using Linux since November 2018 too and man what an amazing change. I started with Ubuntu and almost quit using Linux but then I discovered Manjaro so much better and easier. My fav OS is Clear Linux but my PC doesn't have UEFI so I'm using Manjaro which is just as awesome

I can't post a pic of me desktop as I'm using I3 so it wouldn't really show much but I have to say: Linux is golden, I tried going back to Windows and I just can't, they're just so bad.

Thank you for all your hard work on Manjaro.

This topic was automatically closed 90 days after the last reply. New replies are no longer allowed.