Missing icons in menu and desktop

Hello, fairly new Linux user here who is generally having a great experience giving Manjaro KDE Plasma 21.07 a thorough “Let’s dump Win10 for Linux” effort. Quite honestly gaming was keeping me invested in windows, but Steam/Proton (customized wine?) is shining brightly and proving just how much I can bring with me to Linux!

One issue I seem to be having though is that after I install a game or app (via steam or pamac) is that the icons for the new shortcut appear to be missing on both the desktop and menu… but I can see the icon of the desktop shortcut if I open dolphin to browse the desktop.

For the steam game shortcuts, I was able to update them manually to force them to use one of the cached/downloaded icon images… but some shortcut (like discord) are actually links so I could not edit them.

The forum suggested https://forum.manjaro.org/t/display-desktop-icon-missing/51060 may be related to my issue… and while I think that OP was stating a different problem, I’d like some clarification if the suggestion to “not apply a global theme” is related to my issue.

Do the themes (or is it more specifically the icon packs?) need to know about every possible icon to ensure every menu and desktop shortcut has a visible icon?

I had switched to the “Breeze Dark” global theme… and while typing this I clicked the button to “restore defaults” button which returned me back to the “Breath2” global theme. This made no change to my discord shortcut, even after I uninstalled and reinstalled it.

What changes can I make so that my shortcut icons appear every time one is created?

copy that to /.local/share/applications/ then edit it. It will never be rewritten when discord is updated, and will be used over the default one …

Thank you for your response.

That sounds like some good advise, but I think I still have something to learn about icon packs and/or themes. Like are icon packs complete replacements or more like overrides? If an icon pack doesn’t contain an icon for an app, will no icon show, or will the original icon of the app load?

I added a screenshot to my original post (now that my account has been upgraded to “Basic”)… and so what I’m still wondering is… was the issue always there? or did it only start happening after I applied a new global theme (which swapped to a new icon pack)?

What makes me wonder if the issue was already there is that shortly after I posted this thread, I used PAMAC to install GIMP and it’s icon worked right away… whereas Discord (also installed by PAMAC) had issues with its icon.

Even stranger is that I’m somewhat confident Manjaro Hello’s application list was “complete” when I first launched it… now its missing some icons too; shown as red nots. 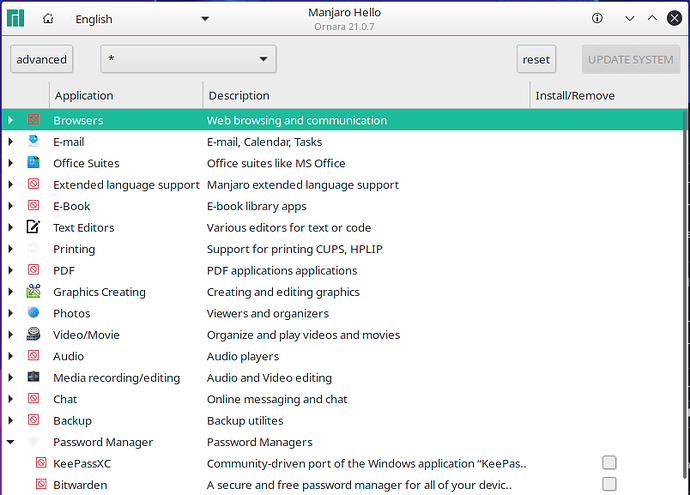 My question is… how do you accomplish steps 1 and 7? (source)
1… killall plasmashell
7… kstart5 plasmashell -or- kstart plasmashell

I’d like to try resetting the KDE theme to see if it resolves my “missing icons” issue.

I ended up reinstalling Manjaro KDE Plasma… this second time around, the menu/desktop icons for apps like Discord are behaving properly… perhaps in part to not applying a global theme?

The steam icons not being seen on the desktop or in the menu is a known issue resolved by rebooting.

Manjaro Hello Application list is still missing icons… but I imagine that’s an issue specific to it.