Hello! I’m trying to install manjaro without a DE, I saw a Minimal version on the downloads page, but that just appeared to be for ARM. Is there any way or alternative to get this running on x86?
I’ve tried just installing the gnome version and then removing it, but this caused problems I can’t even begin to comprehend.

Edit: should have mentioned I want to use Xorg, removing gnome completely messes up the xorg config and other issues I can’t fix. That’s why I’m trying to have manjaro without a DE installed.

or alternative to get this running on x86

That’s an old link, and a native 32-bit distribution has no longer been supported in Manjaro for years already ─ 32-bit compatibility for applications is still supported. Back when the 32-bit Manjaro 18.0.4 image was created, it was already exclusively being put together and maintained by one person among the team ─ @jonathon ─ but that person has in the meantime left the team, and the decision was also made to instead offer an aarch64 version of Manjaro alongside of the x86-64 (amd64) release…

You could experiment with a conversion to Archlinux32 - archlinux32.org

The first one seems to not have received any updates in years, which is unfortunate
The second one refers to archlinux, which I’ve used fine in the past, but I’ve recently ran into some issues that make it really difficult for me to install arch on my system, mostly GPG issues that are completely unfixable without waiting for the team to fix it.

Is not confusing, x86 is what it is, 32bits.
All our downloads provide a minimal and full iso, including the community ones
Once on Manjaro Downloads
and want to download i3 edition for example because is the closes what you will get for a non DE install, you simply switch from full to minimal in the download box 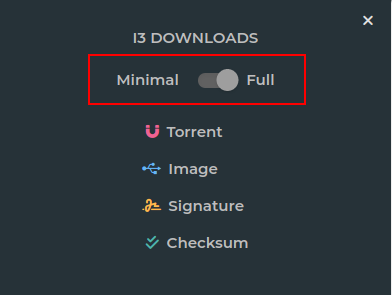 Ah thanks, I didn’t know i3 was a WM, not a DE.
Issue solved