I am new to Manjaro. I am using it on my notebook.

One use case is the remote connection to my working computer (windows). Here I am using CAD systems, which requiring the use of the MMB like in windows defined.

Unfortunately I didn’t find a way to change the MMB from paste to like in windows.

Can anyone help me to change it?

Well I’m not sure what you want to do…
I use mine for scrolling in browsers, opening new tabs from links - all kinds of things, not always paste.

I use easystroke and added some things as 'instant gestures` so that I can use my side buttons for resizing, or grabbing windows to move… have a look at that. 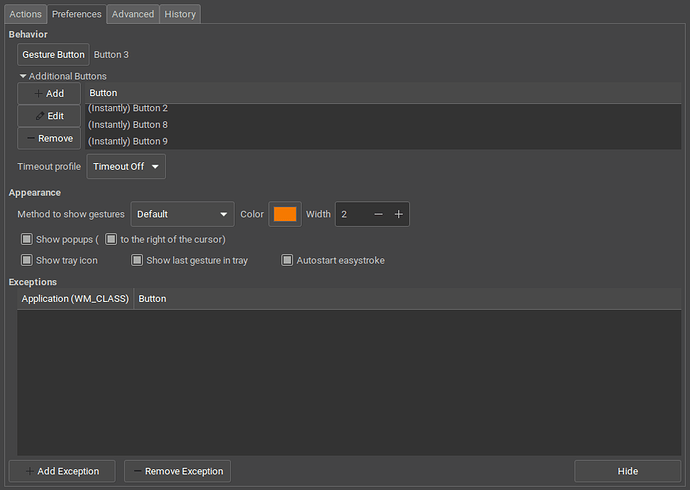 Many thanks for your answer.
Unfortunately the searched option is not existing. As far as I know no short cut is existing to replace the MMB in windows.

MMB is supported.
You haven’t told us what you want it to do.
I have no idea what function you’re referring to…
I use MMB all the time for other functions than pasting.

Here it is defined as mouse button like left and right click. Therefore I just say I want to use the MMB as in windows defined.

Unlike Windoze, in Linux, you can customize any- and everything. So just saying you’d like it to behave as in Windoze is incredibly vague. Because it can be custom per-application, or not. And it’s very limited. I don’t think mine and @Ben’s are the same, because we all use our PCs differently. That’s why it’s so flexible and customizable, so that you can make it work for you, not the other way 'round.

You’ll have to be more specific than that.

Also an option is to look around the 'net for behavior patterns/scripts, but I suspect those can’t always be trusted.

Disable your shortcuts for MMB->Paste where it is configured in your Linux computer. I know KDE has multiple applications using MMB click as shortcut to paste action, for example in the desktop configuration, or in Klipper. Check the shortcuts in the system.

I total understand the point of being to vague, but more clear it’s not defined.

All programs which I know defining it as middle Mouse button click, drag… even windows itself.

Using short cuts on the different mouse buttons is everywhere possible. That’s not the point.

It’s a pity that’s not possible to work with the powerful mouse functions of windows. but now I understand the point of many colleagues: working with Linux with professional cad and fem tools even in remote is nearly impossible.

Many thanks for your help. I will stop working with Linux.

Unless I have completely missed something in Windows, I wouldn’t consider clicking the MMB so I can scroll a page as:

The scroll wheel is for scrolling and the MMB opens new tabs and closes existing tabs.

All programs which I know defining it as middle Mouse button click, drag

If I want to drag something, then left click works in both OS’s.

Please enlighten us to these “powerful mouse functions” that Windows possesses

You get a few. Every program is using it in their own way. For my working tools its powerful and you need in nearly every operation.

Every program is using it in their own way

Then it is programme specific, rather than OS?

The function yes. But the definition from OS is Middle Mouse button click.

But the solution is not to change a bunch of function in multiple programs every second day just for using Linux.

In Linux, every mouse button has it’s definition.
My mousewheel is Button 3 on a press, scroll up and scroll down.
I use it in combination with modifiers - for example, right mouse button and scroll = tab scroll - so in effect, and with easystroke gesture software, my middle mouse button has an almost exponential potential depending on what other modifiers I wish to map it with.

So both OS’s have a definition for the middle mouse click - where’s the issue? With KDE especially - just on the desktop there are about 5 different functions you can access straight in a menu before you even think about mapping your own.

I gave you suggestion, now if you want to make a drama about it, have fun troubleshooting your issue

I guess the real Problem here is that he wants to use the MMB in remote actions → but to transfer the MMB click as “it” to the remote location that ist totaly the Job of the remote connection Software. if that Software does not do this you have to Use another which does, or configure that Software…

As already mentioned both os just recognise the press of the MMB and informs the ui/de/program/etc about it.

Btw. i am using the MMB all day Long, in Browser closing Tabs, Scrolling with it in Firefox, Pasting Text - changing Window sizes… it ist working as expected. actually i have mor usecases for it on Linux and the DE i use it with than on Windows.

one question: Are you using a dedicated Mouse or are your intentions to emulate the MMB with a touchpad on a Notebook - and this is not yet configured that way? (you can configure the Mouse-Touchfield with different gestures like scrolling, klick MMB )

As you might see, here is so much guesswork involved

you may describe more exactly what you are using, hardware/software etc.

A post was split to a new topic: Middle mouse button always pastes no matter what

Necro-bumping is discouraged as per forum rules.