Ok, I really need help…
I have freshly installed manjaro on a new machine and everything worked fine, for two days: Then, all hell breaks loose. The processes “plasmashell” and “lattedock”, as well as “dolphin” (when started), are consuming 30-80% CPU usage, heavily writing something on the disk (IO Write). Also, the used memory of these applications rises slowly, but steadily.

I have already reinstalled the system three times, tryiing desperately to find the root of the problem by maticulously rebooting after every single step of configuration or setup. But it just happenes randomly after a certain period of time - then, the system is stuck in this behaviour immediately after booting.

The complete Desktop is absolutely unusuable, unresponsive. After a while, I can’t even start krunner. 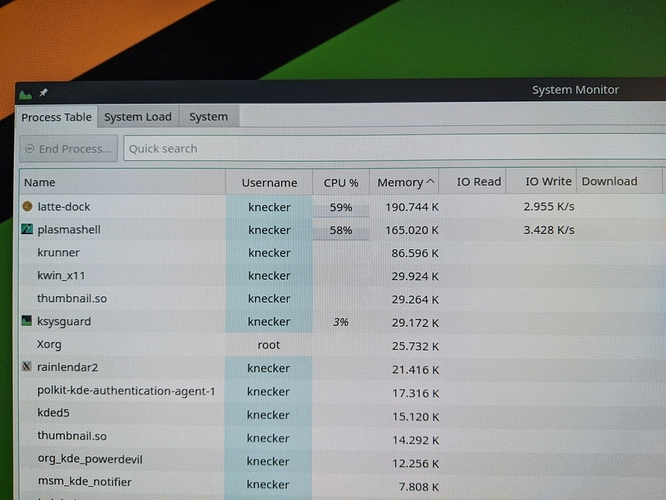 First thing, did you try to use KDE without latte?

Second, as it’s io related, have a look what the processes are actually io-ing. I often use strace to investigate wired process activity. For this, add the pid column to the process list. Open a terminal and use

(im not shure if strace is in default installation, if not, it’s available using pacman.

There should be a lot of log traffic but watch out for fopen or similar file operations that may give you a hint about what’s going on .

Hi a-sassermann and thank you for your input.
Yes, the first thing I tried to rule out is latte, I stopped it, even deinstalled it. Same result. The problem occurs always on the process plasmashell, but also in combination with krunner, dolphin and latte-dock.

I have (again) installed manjaro from scratch and I will (again) try to pinpoint, where the bug is coming from. Thank you very much for your tip with strace. I will try that, as soon as it occurs.

To allow to check if a mimeapps file has changed, and reload file association when needed.

Uh, that’s too high for a semi-noob as me. How could this be related?

It seems like this MR causes hangs of apps and kwin_wayland and high CPU usage of plasmashell on both my PCs: 429593 – KBuildSycoca loop causes hangs

Thanks @cscs! I didn’t saw that one.
I am setting the system up at the moment, fingers crossed…

Same here: plasmashell, dolphin and krunner use extra cpu and write to disk at 2MB/s with latest update 5.20.3

Is that a solution / procedure to resolve the problems?

It worked for me, maybe it will work for you.

If for some reason you are using a mix of giit and non-git packages … then that could be a problem.
And of course even if you use git version for all of plasma … its git … meaning latest, not fully tested … so it could be a problem in and of itself too.
Usually only people desiring the bleeding edge or testers want to be using the GIT packages.

@cscs Thanks for finding this bug! I was trying to chase it down for days!

It worked also for me

If you don’t want to remove the *.git versions of the packages and install the stable versions, another fix is to do the following:

The very presence of the mimeapps.list file in .config and/or any subdirectories causes the issue. The contents of the file don’t even matter. You can recreate the issue by touching ~/.config/mimeapps.list.

@lenonk Wow thank you for this amazing tip - nice one liner fixed all my problems. Had issues with plasmashell and krunner running hot - very annoying.

Usually only people desiring the bleeding edge or testers want to be using the GIT packages.

I have just reinstalled my system with a fresh copy of manjaro kde plasma 20.2 and I can confirm, that indeed kservice and kio are installed as git versions. I am running stable though, why is that? I don’t believe, that this is on purpose, or is it?

Let’s see if the error reoccurs.

The very presence of the mimeapps.list file in .config and/or any subdirectories causes the issue

So, the aforementioned bug with KSycoca actually seems to be the origin of this.

If you still have that log can you post it in full to a pastebin or something ? maybe it will help find why its being pulled. EDIT. Nevermind. Found it in the obvious place. And its fixed now. @Zamundaaa @gan @ceres

So, funny stuff. In the current release of Manjaro, the KSycoca mimeapps.list bug is still there and to make things worse, user-manager as well as his dependencies are installed as git versions (installing manjaro image directly provided from manjaro homepage using the graphical calamari installer with default settings)…

It is quiet shocking to me, but Manjaro KDE is therefore at the moment unfit for daily use, especially for regular users.

A workaround for now (which keeps custom file associations) is to MOVE the mimeapps.list from ~/.config/mimeapps.list to ~/.local/share