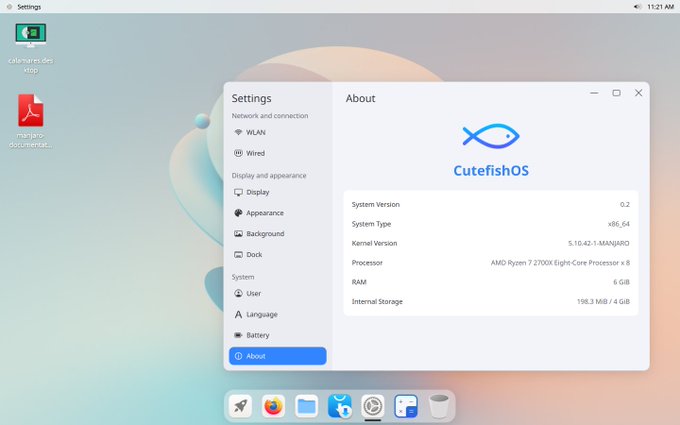 CutefishOS has one goal to create a better experience Linux desktop OS. It will be based on Debian, however we from Manjaro, in close partnership with ArchLinux, provide a Community-Spin based on Manjaro of this new Desktop Environment. It uses the latest KDE Frameworks and parts of Plasma5 to get this Gnome-looking UI created. It is aimed for Beginners and restrict all settings to a bare minimum. Since it is also aimed more for touch and adaptive, we might see it also on Tablets very soon. So give it a try and report issues upstream or visit the CutefishOS forums.

Ah… now I see why the UI feels familiar. Maybe the designer is the same? Or maybe the both take the same UI design class?

But all Manjaro/AUR apps can run without problem, right?

Looking forward to this DE…looking awesome.

Let’s see but it looks like another Deepin-like iOS-inspired DE with limited functionality by design.

UPD: well limited is not the word. It’s almost non-existent even by Gnome standards. Wish them luck though. They have a long road ahead.

Well, it looks interesting and has a lot of potential. Most newcomers don’t need fancy settings and this stripped down DE is exactly for that purpose to get you an easy to use Linux OS without the fuss breaking something.

The real question we should ask is: “does it features fish as the default command-line shell?”

Update: I installed and tested. People, don’t make this mistake. The OS has a ocean of bugs.

*I really don’t know why Manjaro team release this shit.

I’m guessing they released it as its the only way bugs are going to be fixed. Look at gnome, the latest release has more bugs than any DE and they have a dedicated team of devs working on it

How much is the RAM usage after cold boot?

Cutefish is in the arm repos, I know some users have installed it alongside another DE. Should be able to build an iso with the arm iso tools I would have thought

i was thinking about a minimal + cutefish, but i would rather wait for a manjaro arm release.

cutefish is so not ready for daily use. i have it installed on top kde plasma.
it’s laggy & incomplete, file manager is to basic.
i’m on my rpi4 4gb, overclocked to 2ghz.

Cutefish boots in 14 seconds flat in my netbook, so fast that no systemd service verbos even scroll up, its almost grub to DE in 14 to 15 seconds in this 2014 powerless laptop.

I’m using it as a daily driver (eventhough its in Alpha - beta stage).

What are the points I sorely miss:

yet, its blazing fast and no nonsense UI while coming to general usage.

if a full heavy weight kde 5.20 that comes with Q4os (debian 11 bullseye) runs faaaaaast in my netbook with megre resources, what a potential cutefish holds when it would mature and one day be an option in debian stable.

the UI is very simple and at the same time gets the work done without clutter or being an overkill. it does remind of OSX and I wish the dock had a zoom of icons as an option disabled by default.

This is a UI that is almost similar to a phone or Tablet and could sit / fit in one. its extremely promising and all due credits and applause to the developers who are headed in right direction.

Is it worth it if I change my currently running Manjaro XFCE to this cutefish?