I think it would be better to stay with the more widely used option.

I think this is not a sustainable line of thinking. By this token, everyone should be using Windows. I feel this cannot be the only deciding criteria. Besides, MacOs uses zsh by and Arch uses zsh by default. It’s not as uncommon as elvish or fish.

Most scripts on net are bash, and they are not always completely compatible with zsh.

Bash scripts start with shebang that says so. The script is executed with bash regardless of what the default shell is. I think you might be meaning oneliners here?

manjaro is increasingly being adopted by beginners

Which why we should be using zsh. It is more beginner friendly option by a huge margin. The fact that 2% of blindly copied oneliners from the internet fail to execute doesn’t seem like a huge price for syntax highlighting, autocorrection, assistive tab completion, autosuggestion and many other features. Manjaro-zsh-configis specificallywwritten for beginners. The common bash configuration is not.

But, I see that I’m getting off topic here. If you wish to pursue this topic further, we can do so on a dedicated thread.

Yeah it would be a good idea to start a thread for this purpose. I don’t mind either bash or zsh (or even fish). Maybe i am disproportionately frightened of the posts on this forum and reddit that new users would post since they can’t run a particular script from net and blame manjaro for it. I haven’t looked at how manjaro has configured zsh, but I will as soon as I get time

Thanks for your answer — and your work!

I’m not a fan of KDE neither, but that’s one of the beauties of linux - you have options. Alot.

If you’re coming from a different distro, you probably know enough linux already.

If you’re coming from doze (like approximately 99% of non-linux users) and you are used to it/conditioned by it’s ways, KDE is a wonderful alternative to get used to linux and not being put off by just feeling lost. You can move on later and discover the vastness that is linux.

Instead of just playing the nay-sayer card (you’ve probably got some valid and constructive ideas) - is there anything you like about Manjaro/Manjaro KDE that you might wanna share?

EDIT: Look for ‘hello’ instead of ‘welcome’.
EDIT #2: Since this is an announcement thread:

Big Thank You to the Manjaro Team and the helping hand of the community!

Thanks for the hardwork guys

Some here are overstatements. Manjaro KDE is not there to showcase kde software and its capabilities. It is there to provide maximum number of users easy to use and ready to work software on a plasma desktop. Your suggestions such as replacing firefox with falkon are completely illogical. As good as falkon is, it can’t compete with chrome or firefox as the sole browser in any system.

Also, some are just personal preferences. You prefer mpv but I prefer vlc. More people using manjaro for first time would find it easy to use vlc rather than mpv, while seasoned users can install what they want without wasting much time.

I believe that default browser to be bundled should be firefox. Any additional browser is not required to be included.

That said, addons are a personal choice. Though I use ublock origin myself, I don’t think any addon should be included by default by a distro. Firefox itself provides tracking protection. It should be left on users to decide if they want anything beyond it. Maybe plasma-integration addon in kde should be an exception, if any

1.Manjaro 20.1 is incompatible with BIOS (doesn’t boot) only UEFI.

Boots perfectly fine on my two over 10 years old Desktop PC that only have Legacy BIOS. Both free and nonfree driver options for my Nvidia GPUs now load the live session perfectly fine. Previously i had to use nonfree option, always.

Welcome screen doesn’t have info about passwords for root nor user. Password is secret. We don’t have root privalages on Manjaro.

If you are talking about Live Session, then manjaro is what you are looking for. Was always the case in live session for user and password.

Can’t install anything in live

I just opened Pamac, refreshed database and installed Krita that is not included in live media. It works.

By the way, is Elisa
The release cicle of it didn’t make anyone 100% sure of it’s stability. Personally i’m not convinced. Did you know you are the second to mention it in the forum even tho you typed Elise ?

But nothing else, no talk about it, no review by forum members, just twice mentioned by name. Why would be the default?

There is a distinction between no firewall and missing security. Can you prove any security issues with Manjaro ?

I wear glasses and those fonts do not bother me at all. You can always use Ctrl+MouseScroll to change the size of the displayed text inside Konsole.

deprecated font format “ttf” the correct one is “OpenType”

I can give you that, TTF is old indeed, but far from deprecated or obsolete. Will be still used for web design, mobile design and on desktop or mobile displays. What is correct about OpenType? If you work for print quality artwork, then yes OTF is superior.

Many user experience problems with VLC

I had no issues with it, and i don’t mind if SMPlayer will be made default. I like and use both of them.

No fstrim scheduler is present

We have systemd service 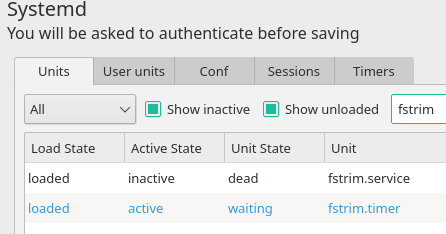 uBlock Origing. No reason not to include it by default.

I prefer to install it from their site.

Go and tell that to KDE developers. They decided to be the default and we agree. People can have more space in the Panel, use global-menu for example …

SSH and Avahi. No need for that.

I double dare you to remove Avahi …
There was an extensive discussion and explanations given about it in the archived forum, there are plenty of sources and documentation about it. Disabling the service is all that can be done.

Let us know how do you install uBlock Origin in Falkon. Or what would be the logic behind making them both defaults?

I find no patience nor interest to address any more time into this. Is exactly the oposite of what feedback is supposed to be to a release announcement, and is also way off of any constructive criticism.

Welcome screen doesn’t have info about passwords for root nor user. Password is secret. We don’t have root privileges on Manjaro.

I agree with you that the root password should be in shown in a very big and readable font at the ISO download page BEFORE the download button or at a different relevant place.

Not having root privileges by default is not a bad thing, could be annoying since not all applications use Polkit for requesting elevated permissions (Hi Dolphin).

Otherwise, for terminal-based applications use su at your own risk.

Thunderbird is GTK and not suitable for KDE Plasma (KDE Plasma has integration of KMail and Kontakt and Kalendare and many more integrated apps- its all under “kde-meta-pim” which is missing
in the default installatation. Don’t give KDE user Thunderbird. It doesn;t belong to KDE.

Unfortunately it’s the only Linux email client which is the most matured and still well maintained.

KMail gets barely updates nor new features. Most of its developers develop a new mail client, called Kube, but it is still not stable and barely usable when your mailbox is an Office 365/Google Apps/Whatever mailbox with custom domain.

Also KDE’s PIM runtime (especially its dependency akonadi) is pretty resource hungry and unstable. You’ll get mariadb running in the background 24/7 for gratis, even when you don’t need KMail for today. Beat me why they didn’t use SQLite or similar lightweight data stores. Or start akonadi and mariadb only when it is needed (like picking contact addresses).

Whoes last release is already 1 year and 4 months ago and compared with the popular browsers has a less rich featureset. There seems to be non-automated commits which fixes bugs, but beat me why they don’t release a new version.

Well that’s a valid privacy concern. Since kuserfeedback is still collecting data despite it is “Disabled”,

Unless you (or someone else) already tried, you need to target the source of the privacy problem. Thus address the issue at the KDE developers. If the request lands on deaf ears, I think it’s indeed time to resolve the problem at distro-level by compiling it without kuserfeedback or add a new XDG-AutoStart-entry which removes those privacy records at startup.

On the contrariety even, Packages packaged as AppImages are barely bloatware. All batteries are included, the handling of the dependencies is the full responsibility of the packager/developer. No need to install extra dependencies or figure out what you’re missing. I guess you confuse it with Flatpak and Snap, which indeed could fill up the drive. Especially not fun when you’re using an SSD.
When I had an Ubuntu laptop at work, I often found myself in conflicts between the system updater and Snap because via one application I installed via Snap, required a new version of a Gnome library which is incompatible with the rest of the system but somehow the “container-layer” which Snap should provide wasn’t there. (But eh, Ubuntu…).
Also FireJail solves a different problem than what AppImage, Flatpak and Snap try to achieve. AppImage, Flatpak and Snap aren’t virtualisation/containerisation solutions.

For the rest, please refain from ad populum reasonings like “Everyone is using X” and “Not everyone has Y”.

Most of your problems just require some deep dive in how some subsystems of the Linux ecosystem work (like Lost+Found) and fiddling with the configuration. I bet you did that as well when you ran Windows

Kde connect cannot find my phone which had been working well on 20.1rc5

Congratulations for the release, devs! When the new Architect ISO will be available? (Or can i download 20.1 with the old ISO?)

Is not Architect embedded into KDE, Gnome, etc, isos?

Oh, I forgot that. Thanks!

Setup KDE with the new ISO smoothly. The only issue is VirtualBox extension still cannot be installed from the app GUI. This problem has been existing since VirtualBox 6.1.10.

Hi,
I read your comments with great interest. Since I’m a fairly new Linux user which distribution would you recommend that would be more in line with the points you made above?
Looking forward to your advice.

For “pure” KDE, which seems to be @dontknow’s preference, I’d look at KDE Neon.