I am using Manjaro KDE on a laptop that has a intel 9300h and a 1050 max-q. In all the games I played the CPU usage was always under 50% and the GPU usage was around 80-90%. In the image I put I was running Rocket League through heroic games launcher and I have auto-cpufreq and tlp installed and it was showing that it was in performance mode and had turbo boost on. Any help would be appreciated as this is now one of few issues I have with Linux at this time.

EDIT: Ignore low cpu usage i tried the games in windows and it was around the same cpu and gpu but there was no stuttering issues

Found the fix. I noticed that csgo was changing my dock to this black colour and found that alt+shift+f12 was the bind for it. When I tried this with rocket league most of the stuttering is gone, so the compositor thing was the issue. Is there a way to auto change this when launching gamemode?

Is there a way to auto change this when launching gamemode?

AFAIK there’s no such a thing as “gamemode”, but you can enable this which should affect games, mostly: 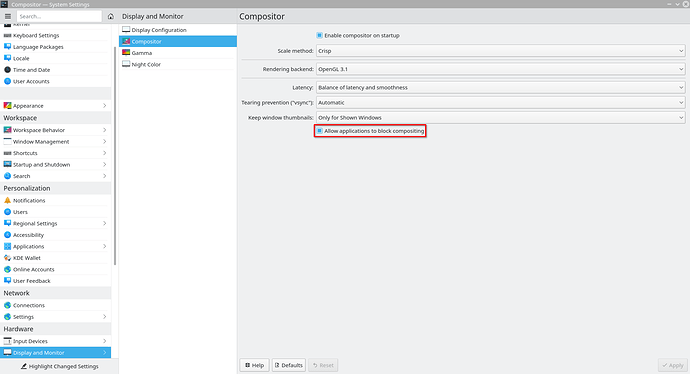 Have you try the gamemode package?

What do you mean by that? If you mean gamemode from pacman then yes I have, just wondering how to add custom scripts to it in order for it to auto toggle the compositor.

Yes! use man gamemoded to find how to add custom scripts