into the troubleshooting section:
When your grub got broken after BIOS update of your motherboard; after performing the steps above to reconfigure grub, you might need to select right boot device (that wasn’t even shown before the grub config refresh) from BIOS/UEFI.

Yes, it seems to be a little sparse at the moment.

could insert picture from here

How about… NO. Those potato pics are horrible and don’t illustrate anything.

. thought it’s like one time thing after swapping motherboard but no.

I’ve mentioned about this same issue users could face as well.
And what do ya know, my motherboard is also from MSi…

How about… NO. Those potato pics are horrible and don’t illustrate anything.

I made you new ones. Apparently you can screenshot inside UEFI.

First is probably the most important one (highlighted “UEFI Hard Disk Drive BBS Priorities” is then the “tricky” part, that may avoid detection). After BIOS update the “manjaro” option then disappears, thus you get into this grub rescue> prompt, then need to perform the grub config parts (su; manjaro-chroot -a; grub-install … ; grub-mkconfig …) and then it still doesn’t auto boot and you end up in grub rescue, but then this manjaro is again available in the selection in UEFI, so you need to put it to first position again.

Feel free to cut them as small as necessary. 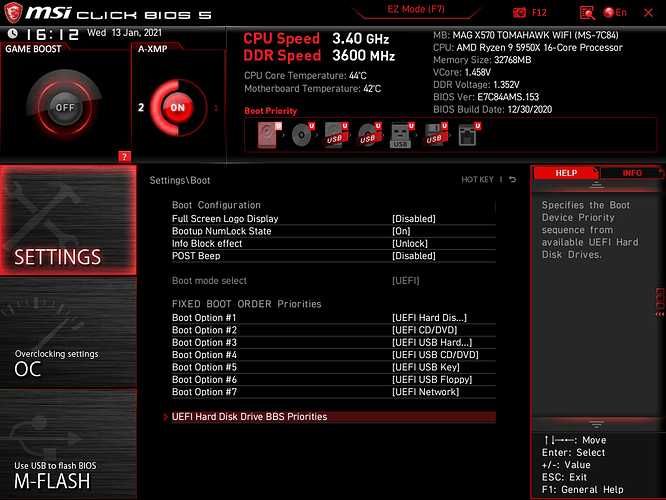 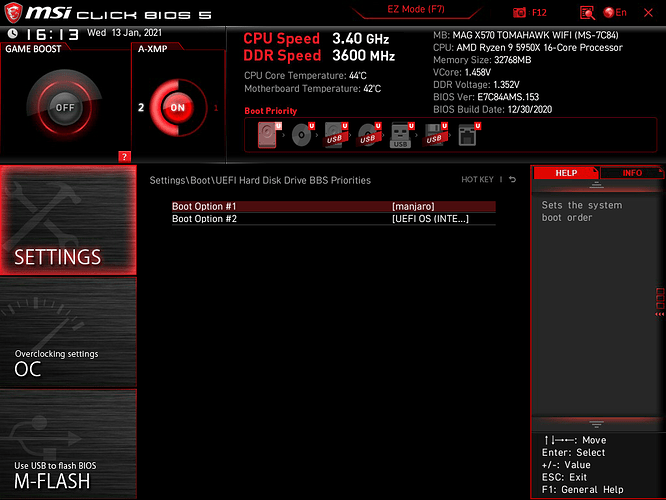 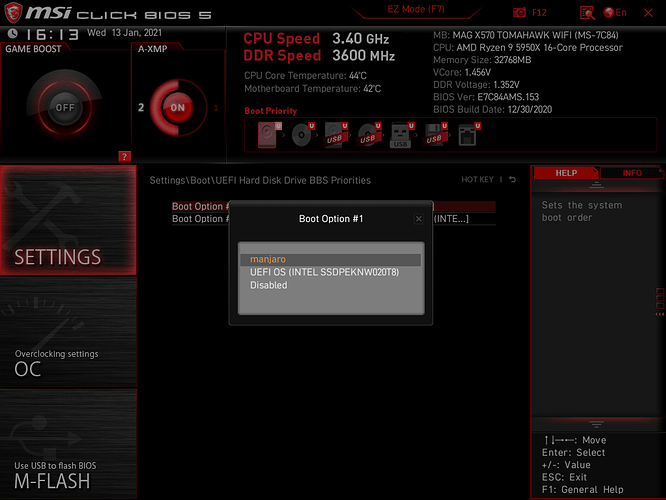 Just out of curiosity, I updated my MSi motherboard’s UEFI to a bit more recent one.
And indeed, the manjaro boot option is absent after the update, and you’ll need the live USB to get it back, since you’ll be greeted by GRUB rescue otherwise.
That is unless you had installed another bootloader with --removable. It’ll let you boot up to your proper system to reinstall the manjaro bootloader.

So if your motherboard vendor is MSi, keep two bootloaders.

This has nothing to do with MSI. I have a Gigabyte motherboard and every time I update my BIOS I have to reinstall GRUB from live USB and chroot.

Also, I like images but these images are vendor specific and wouldn’t help more than just indicating to setup the boot disk priority in BIOS (which is different between motherboard vendors and/or depending on CPU vendor too), which is indicated in each motherboard manual. The disk not being in first priority is a result of updating the BIOS most of the times, as it resets everything in it in theory to start with fresh valid new default values.

My 50 cents: Ubuntu’s EFI entry survives BIOS updates, Manjaro’s one – doesn’t.
I believe it’s the same for Fedora or openSUSE, I just haven’t them installed to check it.