On Lenovo ThinkCentre M900, dual boot with Windows 10. Problems booting were solved eventually by turning off many Win10 switches and also using Suse’s Imagewriter to create manjaro xfce stick. The stick boots, Manjaro appears, but an attempt to install says “no internet”, and checking the network manager applet, only ethernet is supported. There is a possibility on right-clicking the applet to create a wifi connection, but entering information from the Windows 10 wifi connection does not appear to allow creation of working wifi. Somewhere it says that no wifi shows up only with a recent kernel. Is there a fix or do we have to wait for future Manjaro xfce with newer kernel to use wifi system?

It depends on the wifi hardware. Is wifi built in or separate adapter?

Some wifi hardware is supported out of the box. Some wifi support can be added separately, and unfortunately some hardware is not supported by linux.

Posting make and model and wifi hardware will allow for a more specific answer.

There is a USB Wifi plugged into ThinkCentre works well with Windows 10. 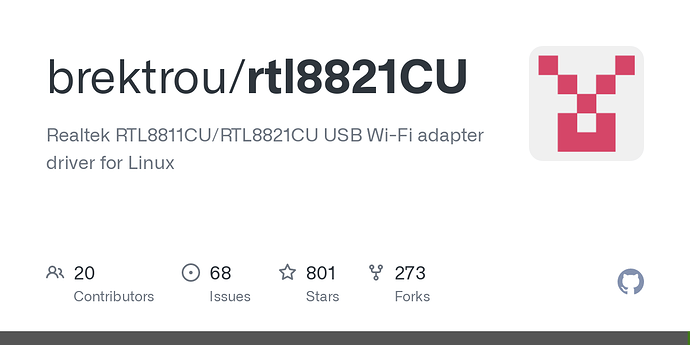 would installing Manjaro without the internet and then, carry by flash drive or something, this Realtek wifi adapter driver over & installing work?

Actually full instructions on github, including kernel stuff. So that’s what I’ll try. m. thanks to Banjo.

You might want to try the AUR package driver for that chipset.

The brektrou rtl8821CU package is the same one that I use.

If you upgrade kernel in future don’t forgot to recompile against that kernel before (re)booting to new kernel.

(offtopic: IMO more wifi packages should be included as standard, plus boot menu shouldn’t be hidden)