Kernel 5.18 is unsupported by the system, cannot do a system update and cannot install a new kernel

I decided to update my system today and this is what I see:

I hadn’t gotten a notification to update my kernel for a while, I wondered if there was a problem with the kernel and as I suspected 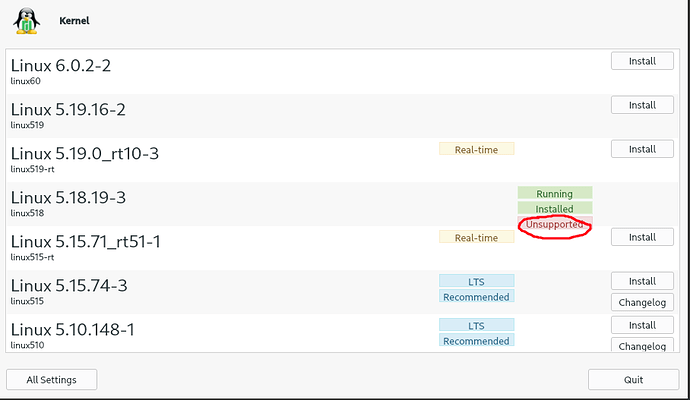 Then I went on to install the newer kernel and this is what I get:

When I install the kernel from Manjaro Settings manager this is what I get: 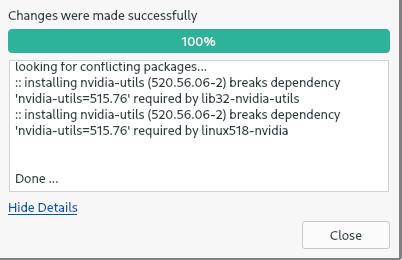 When I install the kernel from Manjaro Settings manager this is what I get:

This seems to say the kernel installation succeeded (we don’t see the beginning). If so,

Also, if you haven’t already, install a LTS kernel as fallback in case you get into that issue again.

I dont think the newer kernel was installed according to this, or is there any other way to check?
PS: After installing the kernel from Manjaro Settings Manager, I did reboot, but it still showed I was on 5.18

Also, if you haven’t already, install a LTS kernel as fallback in case you get into that issue again.

I tried doing this, and yet again It shows I have older packages: 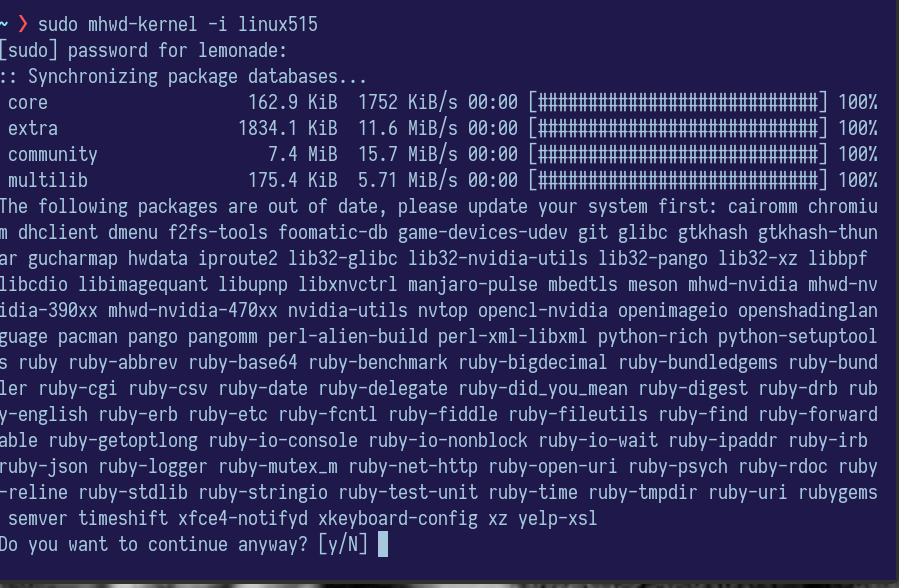 I don’t know. I also seem to have a problem/worry like that when I try to install a new kernel with non-updated packages.

There is, of course the option of doing it in a chroot environment. Which might be a tad more difficult, but not much.

If you want to go ahead and do that, tell me and I’ll explain.

If you want to go ahead and do that, tell me and I’ll explain.

If that fixes it safely, sure!

If you need to provide terminal output, please don’t just provide screenshots of the text. Instead copy the output and paste it here, wrapped in three (3) backticks, before AND after the pasted text. Like this:

This will just cause it to be rendered like this:

Alternatively, paste the text you wish to format as terminal output, select all pasted text, and click the </> button on the taskbar. This will indent the whole pasted section with one TAB, causing it to render the same way as described above.

Thereby increasing legibility thus making it easier for those trying to provide assistance.

When done, you should now be in the chroot environment.

But, be careful, as you’re now in an actual root environment on your computer, so any changes you make will persist after a restart.

Once done, open a browser in the live environment here, reply and tell me, and we’ll continue then.

But I just did Y on that warning while I was installing a kernel and this is what I got:

So yea, it didn’t break my computer.

But I wanted to say something
I have two GPUs and since this is the nvidia utils that is causing the problem, do you thing switching to AMD will help solving the problem? And how can I solve it?

do you thing switching to AMD will help solving the problem?

I have less than 0 idea. But it might if you switch to the AMD, because then you can remove everything nvidia-related, even if only temporary. But:

Isn’t actually from nvidia. It’s because the kernel is EOL and it and related packages have been removed from the repositories so it’s no longer there. So I don’t think so.

Also, if everything’s working fine at the moment, rather wait until you can get a thumb drive.

Note: I can not help because I am not Nivdia user

Thank You! That was easier than expected…I thought removing the graphics card utilities like that would end up breaking my computer or something.