My system’s load average generally bumbles along between virtually zero overnight to an average of two or three when I’m actively doing a lot of intensive work on it.
After installing 5.15 and rebooting into it, my load average quickly rose to 30. After trying to troubleshoot it and having failed to find any obvious cause, I rebooted and again after a few hours it again rose, though not as badly, to about 9.
This graph shows the effects of this kernel on the system’s load average. 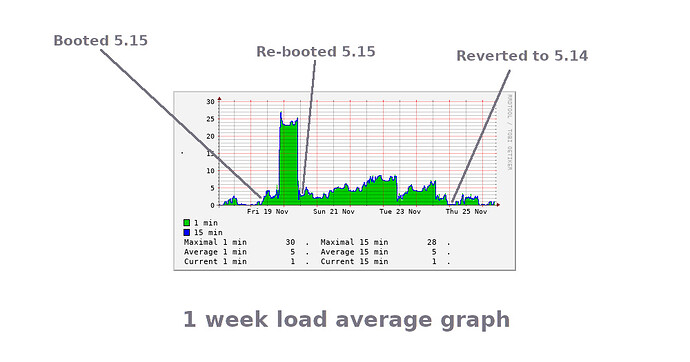 I checked the obvious culprits - CPU use has stayed within its normal range, as has RAM and swap use.

For comparison, this graph shows the load average over the previous month - as can be seen it’s normally much lower. 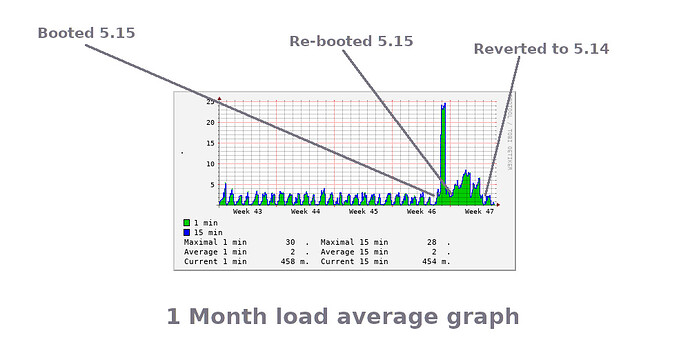 I don’t know whether this is a genuine increase in load average or a bug in the way the kernel is reporting it. However I didn’t notice any difference in my computer’s performance with 5.15 running.
I’ve removed this kernel for the time being, but I’m happy to reinstall and perform any tests that may be helpful.

There is chance it can be specific to your CPU as I haven’t noticed such thing on my system afaik, of course I haven’t measured for long time but when I turn off all my DE stuff which sometimes spikes because like BALOO, kwin and etc… the average seems to be 1-3 (Some other small things running of course)

It’s weird the idle cpu usage would fluctuate like this I think it’s rather related to some software maybe, no idea but I know others would like this information too so

Can you provide output of LANG=C inxi --admin --verbosity=7 --filter --width and when idle on 5.14 ps aux --sort -pcpu and do that also for 5.15 so we can compare some way I guess
sudo dmesg --level err -L could be useful too to compare on each kernel right after reboot

Will do.
The CPU is an AMD Ryzen 3 2200G with Radeon Vega Graphics, using the Open Source video driver.

I also have absolutely 0 problems with version 5.15.

Another useful thing would be to provide the output of

I have no problem with Linux Kernel 5.15, but I notice that it starts a bit slow at boot time compared to kernel 5.10 LTS. (Maybe there are a lot of features in it)

I use 5.15 myself, and I don’t have any high load-average. So it does, indeed, seem as if it’s localized to your environment. My load average:

Same here, and I just ended a game session

Maybe the tool you use for logging your system info has issues with kernel 5.15? Give more info.

Maybe the tool you use for logging your system info has issues with kernel 5.15? Give more info.

Well the graphing is via MRTG, but all that does is grab the output of uptime and extract the load average from there. At the same time, htop also reports the same figures. So I’m reasonably confident I’m at least getting what the kernel is reporting.

I can’t see a way to upload the files here, so I’ve put them on my pCloud account so I can link to them.

From previous experience it will probably be a few hours before the load average starts to build, so I’ll repeat the exercise when it has in case this provides anything useful.

Well, I can’t really see any reason for that to be happening from these data, maybe I missed something, hopefully someone else will be able to see something,
but I noticed you have outdated BIOS/UEFI, I recommend you to update that

It’s always good to update BIOS/UEFI
Maybe it will even solve that, who knows, I see in changelogs a stability, performance etc… improvements etc…
Maybe the new kernel 5.15 is using some new feature(Code for AMD Ryzen processors is getting a lot of changes in kernel often at the moment) that is poorly written in your bios and in the newer one it’s fixed, improved

EDIT:
Even in one of the changelogs is “Fixes an issue with certain Linux distros”

Just to add… The reason my CPU usage fluctuates through the 24 hour period is mainly because the machine’s fairly quiescent when I’m not actually sitting at the screen. Thought CPU usage increases at times purely because my radio timeshift system uses one of my RTL-SDR devices to decode DAB signals, which is relatively CPU-intensive.
I have Baloo disabled so at least I know that isn’t the cause.

As you say though, it may be something specific to my CPU model. In fact the lack of anyone else with this problem makes that seem more probable.

Has anybody reported this to linux-kernel@vger.kernel.org? This looks like a real problem, but I’m afraid the folks who can fix it will only discover it here by accident.

I thought I’d wait until I could try out the next release of this kernel first and 5.15.6-2 has stopped it happening, so evidently just a glitch with the previous release.