I have been having issues with my Manjaro OS so I decided to re-install. I booted with the Live USB, set up the partitions on the Linux disk, and installed Manjaro as per this page: [root tip] Dual boot Manjaro and Windows.

Here are issues I am having now:

This is what my partitions look like right now from my Live USB boot:

It looks like the Windows disk does not have an EFI partition, and the Linux disk has two with two different file systems. I must say, that is a very unusual setup and may be the source of some of your trouble.

Before you reinstalled Manjaro, were you booting Windows off an EFI from another disk like this? I did not realize that was possible. Or did you move Windows? How did you get it like this?

I have not changed anything on the Windows disk prior to the reinstall. As for the EFI booting, I am not sure. The only thing I know is that I followed a tutorial for dual booting two disks, got it working, and I would see both disks showing up in my bios F12 menu (which it is doing now as well). When I chose win/lin it would boot into respective OS.

Did you do automatic partitioning, or side-by-side install perhaps?

Did you do automatic partitioning, or side-by-side install perhaps?

Manual. I don’t recall if I formatted the EFI partition.

Did you previously have two separate partitions on the Linux side (excluding swap and EFI), or did it get like that after the reinstall?

I had two partitions, one of which was an old installation of “/” (from a prior installation) that I turned into “/home” for this installation. So “/” and “/home” are separate partitions (the larger part being “/”).

FWIW, I am at the partitioning step of the installer again. Thinking maybe I make another run-through but I wanted to verify I was using the correct steps for what I am trying to accomplish.

Okay, it is fine to keep / and /home on separate partitions if you like but you must specify a third partition for boot (mounted at /boot/efi). Choose P1 for this, mount but do not format. Then remove the boot and esp flags from P3.

@BluishHumility Do I need to make the 16MB partition on my windows disk bootable? Or is the primary partition supposed to be?

Here is what my parts look like in the installer. 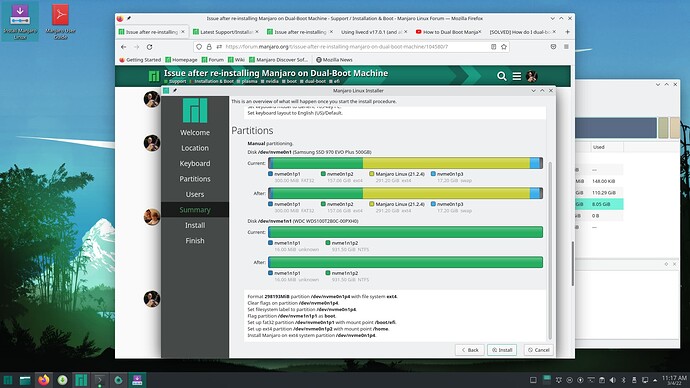 Do I need to make the 16MB partition on my windows disk bootable?

That partition (Windows reserved partition) is not a boot partition. It is related to something else Windows does. I am not specifically sure what–perhaps a recovery task?

On GPT Windows boots from an EFI partition, just like Linux. Typically the EFI partition is formatted FAT32. For Linux it is possible to have the boot partition formatted otherwise, but for Windows I think it is always FAT32. Usually only one EFI partition should be used, so if you are dual-booting with Windows your EFI partition will always be FAT32.

It is unusual to have a boot partition on a separate disk (like your Windows setup), but if it was working for you before I would say it should be fine.

Here is what my parts look like in the installer.

Looks good to me!

It is possible I did not have an EFI partition on my Windows disk. It has been a while so I have forgotten exactly what steps I took originally. As for the current status, I can boot into linux no problem but when I choose my windows disk from the BIOS selection page it just sort of sits there and does nothing.

It is possible I did not have an EFI partition on my Windows disk.

I was thinking about this, and it is impossible that installing Manjaro on nvme0n1 would have somehow removed the EFI partition from nvme1n1 (and then magically expanded the Windows partitions to fill the disk

). So you must have been booting Windows from the EFI partition on nvme0n1.

I can boot into linux no problem but when I choose my windows disk from the BIOS selection page it just sort of sits there and does nothing.

Did you finalize the installation above, or do you still have two partitions with boot flags?

If you eliminate the extra boot flags and you still can’t get Windows to boot from BIOS, you could try to get Windows on your grub boot menu (I’m not sure how people do it, whether OS prober detects it or you need a 40_custom menu entry or what).

It is possible to repair the Windows bootloader from Windows repair mode (or whatever it is called). I forget specifically how to bring it up but it is something like interrupting the boot sequence three consecutive times–you’d have to do a web search if you aren’t familiar. Anyway, if you decide to go that route you will probably have to reinstall grub again because Windows can be destructive when it writes to the EFI partition.