Is it posible to install Shopify on Manjaro?

I need to develop using Shopify, and in the official documentation I don’t see the option to install on Arch.

There are only two packages available in aur:

But there is no shopify. I hope it can be posible.
Can someone guide me with this?

According to their guide you can install Shopify from rubygems.org so at first install rubygems if you don’t have:

then install Shopify itself:

Will I be inconvenienced if I agree to install this? 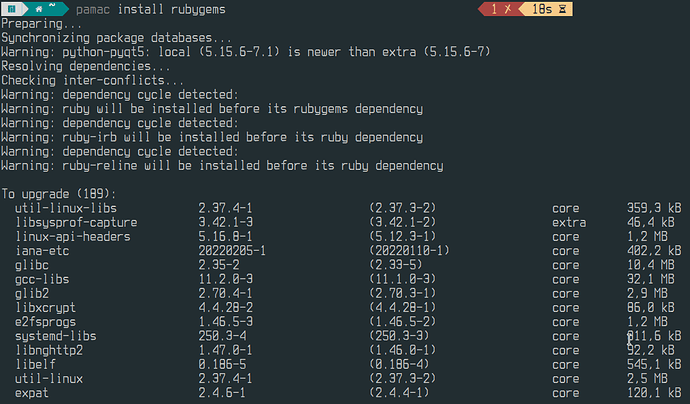 At the end of the file this message appears:

What do you think?

No, why would you?

You should first update your mirror (because of the qt5 message)

I updated my system with:

and now, when I run the command

the following message is displayed: 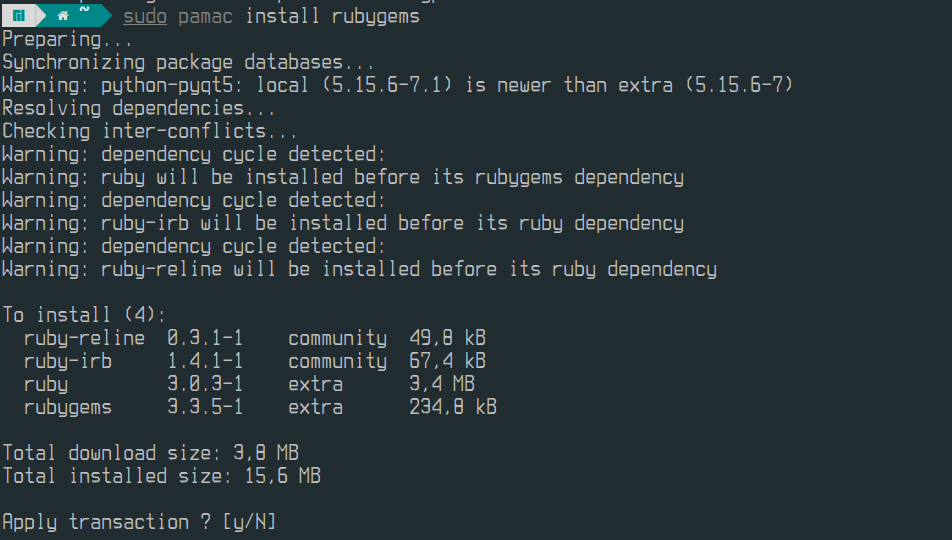 Will this cause me problems when installing it? How are these types of conflicts resolved?

Will this cause me problems when installing it? How are these types of conflicts resolved?

That packages are interdipendents, same happen with harfbuzz and freetype, is not an error, last line ask you to apply; don’t say there is a problem otherwise it would have failed

Ok, I’ll try accepting then. Thanks.

Well, forgive my ignorance on the subject. Why is it necessary to update the mirror list?

And then do a sudo pacman -Syyuu

Your installed version of python-qt5 is newer than the ones on the repos, do either you installed it manually or there was n official downgrade. You should run above command to sync your installation to the repos.

For whatever reason your python-pyqt5 is newer than what’s in the repository. Sometimes a package is reverted because some users have issues but otherwise it may be harmless to remain on the newer version. If you experience bugs then reinstall the package, it’ll downgrade to the one available in the repository.

@mithrial I run that command:

I’m in the same situation.

Sorry I will not post more screenshots. The situation is that these conflicts appear to me and I don’t know if they will generate problems or not if I accept to install. As you can see, the default option recommended in the terminal is to not accept.

There are no conflicts - only warnings.

Well, I ran the command:

no problem. But when I run the command:

I think gem is not installed.

It’s an autocorrect feature of your shell (zsh)

It’s trying to assist you when you might have made a typo and make it easy to correct it.

Not really helpful in this case - since you didn’t make a typo, but actually meant what you typed.
So:
choose [n]o - to not correct it …

I ran the commands:

as @Tomek said and shopify-cli was installed successfully. But when running the command:

as it says in the official guide, it says that the shopify command is not recognized.

I can see this Warning in the terminal: