Install of updates from 5/13/22 stop at inter-conflicts stage?

Hello, I am trying to install the newest updates from 5/13 and am having a bit of trouble. It may be something I caused because I clicked Apply and then stepped away for awhile forgetting about waiting for inter-conflicts; so, my machine sat at that screen for about two hours. When I returned, I clicked the button to proceed and it continued to download 1.6 GiB of 1.7 and then stopped.

I rebooted and tried again several times and it appears to stop in the stage of checking for inter-conflicts. The log for the most recent attempt is:

It’s been sitting at this point for about two hours.
Would you please tell me how to correct the issue? I have never installed anything outside of the built-in software installer nor outside of the standard repository; so, I don’t know what may have caused these warnings.

since its sitting there for 2 hours, its safe to assume that your update got stuck, so force cancel it and try rerun it again - dont reboot!!!

Thank you. I’ll try it again but I have done so about three times thus far.
Below is the transaction summary that it doesn’t seem to continue beyond once I click Apply.
Even after the two hours, the installer is still responsive to mouse clicks and scrolls but the log never moves past that showed in the first post and the progress bar appears inactive throughout. It appears as though it never gets started again more so than freezing after a period of time.
Thanks.

I edited this post to add that when I tried to update last night it did go so far as updating the key ring which I can see in history now and recall that is stopped after that point, but don’t know if it is related. 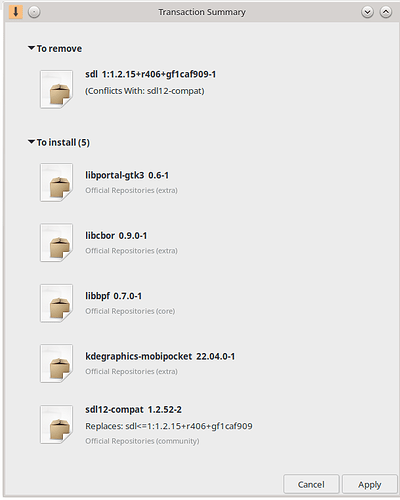 so try running it via command: pamac update

Thank you. May I ask another question, please? After running pamac update and reaching the point where it shows 454 upgrades to install, I get:

This appears to be the same point at which it stopped working in the GUI installer. Does the -39.9MB indicate anything? I was expecting 1.7GiB or so.
Thank you.

Of course. I did that before I wrote the response. That’s why there is a ‘y’ at the bottom of the shaded area. Nothing else has taken place on that screen since then and it appears stalled at the same point of inter-conflicts as in the GUI installer. I’ll give it a few days and try again. I’m in no hurry. Thank you for the suggestions.

i have no idea why gets stuck there … lets wait, until someone more skilled will come…

The updates finally installed. I read over many of the responses on the post about this update but it took a couple days before my tiny brain made the connection between posts about which repository a library file was pulled and the message I got about there being a conflict concerning some library files. I had the AUR, Snap, Flatpack support turned off. After turning them on, it still sat at checking for inter-conflicts for close to two hours but it finally installed the updates. Maybe this was the issue or just a coincidence.

yes, there was some package moved from official repositories to AUR, so that was probably the cause…