Install an application with all dependencies at once

I don’t know if the title of the post properly describes my situation, but sometimes when I try to install an application from AUR it says error making cause some dependencies are missing, I want through this problem right now when I tried to install kooha-git package on AUR:

So I installed cmake and pkgconf and things worked fine, but how can I install all the dependencies related to an application so I don’t have to do it manually? I don’t have a great knowledge about Linux so I can’t always solve problems like this, this time I was able to deduce that these specific applications were missing, but is there any way to know what dependencies I need to avoid errors like this?

You need the building tools, and these need to be installed, see:

how can I install all the dependencies related to an application so I don’t have to do it manually?

You don’t, either the package has its dependencies filed properly in the PKGBUILD, or it doesn’t.

So I installed cmake and pkgconf

These are not dependencies, these are tools needed to build the package, as already said above, you should have installed them all BEFORE using the AUR.

I’ve been using yay for a longtime without any issues, may I ask why you say to avoid it?

Not me, the yay creator himself said that. Paru is a rewrite of yay in rust without the problems’ yay have being a Golang script

Why dun u install the Flatpak version, instead of the AUR version?
Flatpak has all the dependencies packaged.

Why are you installing the VCS package from the AUR when kooha is in the Arch community repository?

As @wind77 mentioned, it’s also available as a Flatpak.

Try to avoid yay, use paru if necesary

the yay creator himself said that

Source, please? If it was that bad, the developer would archive the repo and stop maintaining it.

the yay creator himself said that

I’d be interested in the source for that as well.
EOS currently relies on yay as it’s AUR helper, for instance.
And I use it without issue so far as well.

If I remember correctly, one developer split and created a new AUR helper. He, this one developer, may have said that. // EDIT while writing this I just searched, and I was correct: https://www.reddit.com/r/archlinux/comments/jjn1c1/paru_v100_and_stepping_away_from_yay/ //EDIT2: he didn’t say not to use yay actually, he said yay will probably not receive updates anymore as he was mainly developing it.

Paru is a new AUR helper based on Yay. It is written in Go and gives you a feature rich experience with AUR packages in Arch Linux.

he said yay will probably not receive updates anymore as he was mainly developing it.

And he was wrong. Maybe he just wanted to create his own AUR Helper, since he was not the creator of yay.

The correct quote, just needed to read it in the link:

Jguer is still there, so there’s no need to panic and move away from yay. Just don’t expect much new development on it.

I’m not aware of major development in yay feature wise. Which makes his quote correct, but I don’t use yay so maybe I missed something.

My original intention was to port yay to rust and keep it as yay. But he didn’t want that, so I made it its own project.

Anyway, this is off topic, enough for me

I’m not aware of major development in yay feature wise.

What do you consider a “major” development? 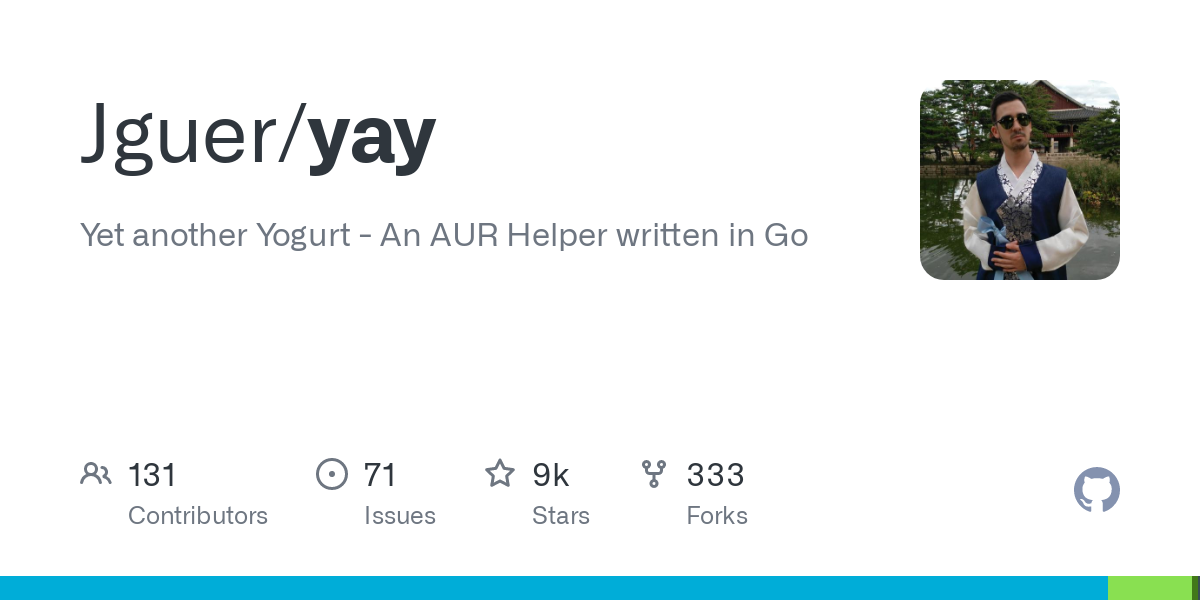 Yet another Yogurt - An AUR Helper written in Go. Contribute to Jguer/yay development by creating an account on GitHub.

Thank you for your help! It worked perfectly. Can I use pamac build to install any package from AUR?

Indeed. That is exactly what it is for (you can also build local PKGBUILD too like that in a folder with just pamac build command, if I recall correctly).

Pamac build is the recommended way