How to rearrange the Nautilus sidepanel?

I want to rearrange the sidepanel of nautilus. I added the Desktop as a Bookmark, because I use it a lot, so I want it to be on top, but new bookmarks are added at the bottom. How do I change that?

Forgive me OT:
Usually Nautilus appear only to sink other surface vessels … mostly it hides inside a volcano on a hidden island.

I want to rearrange the sidepanel of nautilus. I added the Desktop as a Bookmark, because I use it a lot, so I want it to be on top, but new bookmarks are added at the bottom. How do I change that?

That’s the order I would test solutions in. Number 2 is the most likely to work.

Dconf editor: didnt think of it, bit also didn’t have an option for that… Also couldnt enable drag and drop

Reordering by removing would propably work if I could delete the other folder connections, but default ones cant be deleted by the user…

writing a plugin: any Ideas how to look for information on how to do that?

Archwiki says to edit ~/.config/user-dirs.dirs
but there, Desktop is enabled, and disabeling other entrys doesnt have any effect on Nautilus…
Looks like they really don’t want people to drop files onto their desktops

Any further ideas for .config?

Reordering by removing would propably work if I could delete the other folder connections, but default ones cant be deleted by the user…

You want to rearrange them among the default folders too? That is likely not very easy to achieve.

For me, editing entries on that file takes effect after you restart nautilus:

You can also just rename those entries by right clicking them.

Nope, doent work for me

But I just fixed the problem by installing another filemanager. I can’t decide between Nemo and Thunar yet, but everything is better than Nautilus at the moment, because I get some decent customization-options, even though the main icon-theme doesnt integrate as well.
So, less of a problem there…

Can you describe exactly what you would want to do?

Get an entry “Desktop” in the sidepanel of Nautilus, right between “Home” and “Documents”.

Hmm… I’ll test something tonight. I’m not sure if that is possible, but it might be.

So, you can do this: 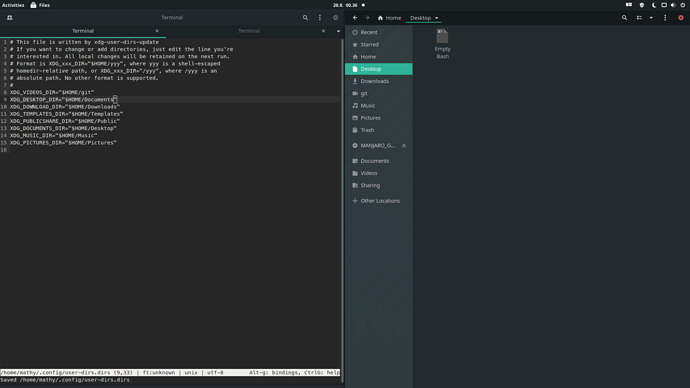 In ~/.config/user-dirs.dirs Switch Desktop and Documents with each other. Then pkill nautilus and start it again. As you can see, you will have the wrong icons for them, but the Desktop is where you wanted it to be.

This is my configuration:

It is very hacky, but hey, this is linux

I was afraid to suggest this method because I thought, these variables could also be used by other applications and could potentially break something.

Are these only used by file browsers?

Not sure. It is possible, but not very likely. Not even all the file managers use that file.

wow, that somehow works…
I tried editing that file in the beginning, but as it seems, Nautilus isn’t using that file completely, because the order is different than in the file. An when I comment out “Downloads”, it is still showing in Nautilus, but between Network and Other Locations.

But got the same result as you, replaced the documents-folder with the desktop folder (which is not a great solution, because these are the folders I use the most), but maybe I’ll change it later for some other folder…
But now, Caja is showing it double. well, lets just call it unnecessary shitty design and be done with it

Thanks for the help, it is usable to me now, and now I consider not switching to nemo…