How to fix default noise when recording from built-in microphone

Questions:
1/ why there is no default noise recording cancellation?

I modified as such: 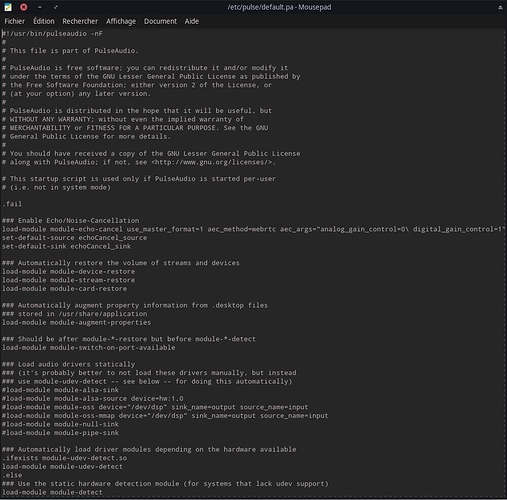 1/ Echo-cancellation is usually not needed if using headphones

Some microphones have built-in echo cancellation. Adding echo-cancelling in PulseAudio would not be necessary and could be counter-productive

Some VOIP software has built-in echo cancellation, so adding another software algorithm could also be unnecessary and counter-productive

2/ Archwiki should have been more specific about adding commands to the end of /etc/pulse/default.pa

your screenshot does not show the end of /etc/pulse/default.pa
the final section has partial commands for default sink and source commented out

use this command to get a list of loaded modules

2/ Archwiki should have been more specific about adding commands to the end of /etc/pulse/default.pa

I just added at the very top.

your screenshot does not show the end of /etc/pulse/default.pa

file too long, and upload is only for images, event .txt is not accepted

apologies, I gave you wrong command to check modules

file too long, and upload is only for images

not a problem as I know what should be there
but for future reference if you need help again, copy and paste content from terminal

On manjaro you should use this command to restart PulseAudio

But this is also not a big problem. A system reboot will get PulseAudio restarted and running correctly

apologies, I gave you wrong command to check modules

I’ve rebooted, but do no see “noise-cancellation” or “echo-cancel…”
’
[laxfc@laxfc-tosh ~]$ pacmd
Welcome to PulseAudio 14.0! Use “help” for usage information.

you could also use

The command you have used is not showing module names, but there does not appear to be a description relating to echo-cancellation

There have been pamac updates including for pulseaudio, still I do not have echo cancelation.

or try aec_method=speex instead of webrtc

The issue being: I don’t know what I’m doing or should do in the present matter

maybe I ought to pamac install some pulseaudio modules

command i suggested in previous post was not correct

I suggest you edit your /etc/pulse/default.pa file and remove the use_master_format=1 option from load-module module-echo-cancel