I want to customize the maximize button in such a way that it enters the app into full screen. I want the work of fn11 through the maximize button.
Apart from that, I also want to show the panel in fullscreen mode when I move the cursor above.

Both these features are present in macOS. Just wanted to get in Manjaro.

I’m afraid that what you’re asking about is not possible in KDE Plasma. GNU/Linux, and for that matter, KDE Plasma, are not macOS.

That said, you could always file a feature request with the KDE developers, although there’s absolutely no guarantee that they will consider your request.

I know that KDE Plasma is not macOS. I found a KWin script that moves the fullscreen app to a new virtual desktop and it is working fine (moving fullcreen apps to new virtual desktop was not enabled by default on my system). I was just searching whether there are some KWin scripts or something that will help me in getting these functionalities.

Btw, thanks for your reply.

One thing that I can advise you ─ although not everyone likes it ─ is to right-click the application launcher menu button and choose “Show Alternatives” (or something to that effect), and then select the Application Dashboard instead ─ you may need to unlock your widgets first.

The Application Dashboard is a full-screen alternative to the cascading menu or the Kickoff. I’m using it myself. 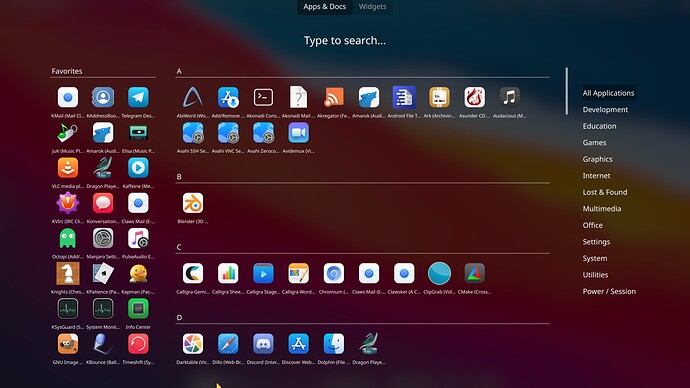 You could maybe make use of the Always Visible option

Or maybe use Latte-Dock instead, as a Panle and has 6 options for visibility and interaction.

Always Visible is already enabled. It is working fine when I am using apps to maximize screen. But, the moment I switch to fullscreen mode, the panel is not showing.

But, the moment I switch to fullscreen mode, the panel is not showing.

In full-screen mode, it’s not supposed to. That’s the whole idea behind full-screen mode. But Latte Dock might be able to do that anyway ─ I don’t really know because I’ve only briefly played around with it and I didn’t really like it.

have you tried this kwin script ?

This is a fork of Aetf kwin-maximize-to-new-desktop.MACsimize is a KWin script that moves maximized windows to a new virtual desktop, moves back to original desktop if restored or closed. Each...

Its working, but only on fullscreen. It is not working on maximize windows. I have to press f11 to move the windows to the new desktop. Is there any way to configure the maximize button to act as fullscreen button?