How to achieve 'zone management' desktop layout on Manjaro

Basically i want that any window of programs could be place in any of the three Zones ( A, B or C) and it will automatically adjust to the size of that Zone.

But if i play game or want a program go full screen, it can do that too.

I there any tools or script to do this!
I have try windows management but it’s not work.

The idea comes from windows power toy ( Zone) at github

I like this zone management to be permanently on all desktop (or if you have Multi monitors setup) have on my manjaro.

I didn’t even know this existed, I never had an ultra wide monitor though. Here is the Windows tool for reference FancyZones Overview · microsoft/PowerToys Wiki · GitHub

EDIT: I found this, maybe a start to think how you could achieve what you want? 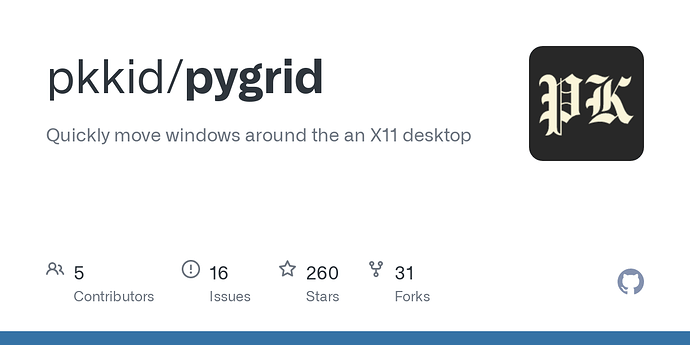 Quickly move windows around the an X11 desktop. Contribute to pkkid/pygrid development by creating an account on GitHub.

EDIT 2: found that too 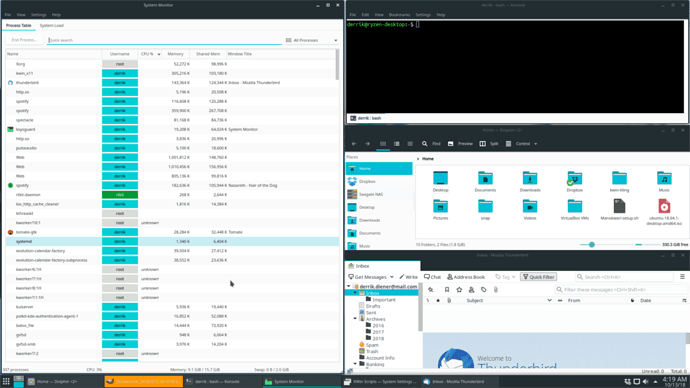 How To Enable Tiling Window Support In KDE Plasma 5

How To Enable Tiling Window Support In KDE Plasma 5

Note that I just found the projects, don’t know anything else about it, or if it would work for you

I think the last link would be preferable as it is integrated to Plasma and the project seems to be well alive GitHub - kwin-scripts/kwin-tiling: Tiling script for kwin

EDIT 3: I think what you want is a tiling windows manager, Manjaro doesn’t have official ISO which support that I think, but there are community edition available (reclick the EDITION menu and look for community editions there are some there), but beware that you’re entering a new world of dedication and learning if you want to make it work exactly as you want. If you don’t know what a tiling windows manager is then maybe look into that, that could be better for your usage. I guess you could convert your KDE with lot of work, but it would be preferable to install a fresh ISO with the appropriate windows tiling manager already in it.

I wish there were something like what windows user have the PowerToys with zone setup tool and with the easy setup!

That’s what the python tool and the Plasma script can do if I understood. And that’s what windows tiling managers do natively

Also, the kwin script is available on the AUR, in various versions apparently.

Well interesting, but i am not a programmer so i dont have any idea
Is there anyone that could help me fix this??

Did you read the link " How To Enable Tiling Window Support In KDE Plasma 5 " ? I mean you can try to follow it, and if you have a problem we can “help you fix this”… because currently what is the problem to fix?

I tried both of these.
The first runs but does absolutely nothing. The second partially works, it slots the windows into the free space, but the key-commands to move the windows do nothing, and these are what I need the most. Are there any others? I have Plasma KDE.

but the key-commands to move the windows do nothing, and these are what I need the most.

Did you read the documentation on how to configure kwin-tiling? Did you configure anything at all?

Also, on a side note, by searching kwin tiling in Pamac, I got these results from the AUR: 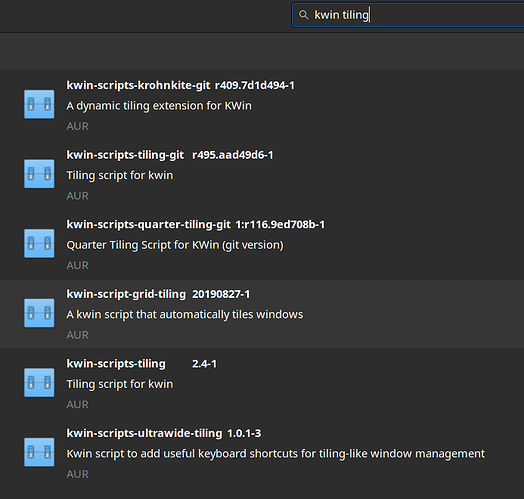 There are multiple possibilities. Of course make sure what you install is compatible, maintained, and can do what you want… but by searching even more I’m sure there are lot of solutions.

I did nothing to configure it just wanted it to work using those defaults that were set, like Meta+Shift+H to move left, etc. And I tried searching in pamac like U did but I get no results. Granted this is my first time using Manjaro so I know basically nothing so maybe I’m doing it wrong?

Is possible that my usage of meta key is wrong? I normally use esc, but I also tried alt, ctrl, fn and various combos of those? What’s the meta key?

OK if you’re completely new I suggest you to not modify your Plasma desktop to convert it to a sudo-tiling-windows manager. As suggested, if this is the kind of windows manager you want you should look into the windows manager that are made for this specifically as discussed earlier in the thread, and use a desktop pre-configured with a windows tiling manager by default, like some of the Manjaro Community edition…

As said maybe if you read the documentation and configure kwin-tilling, maybe you’ll be able to achieve what you want but at this point I can’t help more, you’re gonna need to invest your own time and figure it out.

PS: my screenshot shows the AUR results in Pamac, if you don’t know what the AUR is, read the wiki about it Arch User Repository - Manjaro

Be careful with what you’re doing if you don’t want to break your system as this is highly possible when you just randomly try things.