How do you use Nvidia X Server Settings exactly?

I’m trying to play King of Fighters XIV on Manjaro KDE, but for some odd reason the game will run in 30fps or way less on all of the stages. I can run more demanding games like Tekken 7 and Street Fighter 5 on here so it’s jarring to see this happening. So I look into it on ProtonDB but most people don’t have any problems, and the only solution I’ve found is to use the NVidia control panel to fix it. The thing is that the solution is exclusive to Windows as the NVidia control panel on windows and Linux are completely different. I’m really confused on how to set up application profiles and rules, I look things up like “what are valid keys for NVidia Settings on Linux” and I don’t get anything that could help me. Is there a way I can actually use this?

open a console or terminal

I know how to open the control panel. How do I use application profiles though?

This is for Ubuntu but should be the same for Manjaro, I guess:

setting up driver profile (you might want to install Nvidia Xserver from the...

I am using the intel/nvidia hybrid drivers, and my xserver settings has hardly anything in it. Does yours look like this? 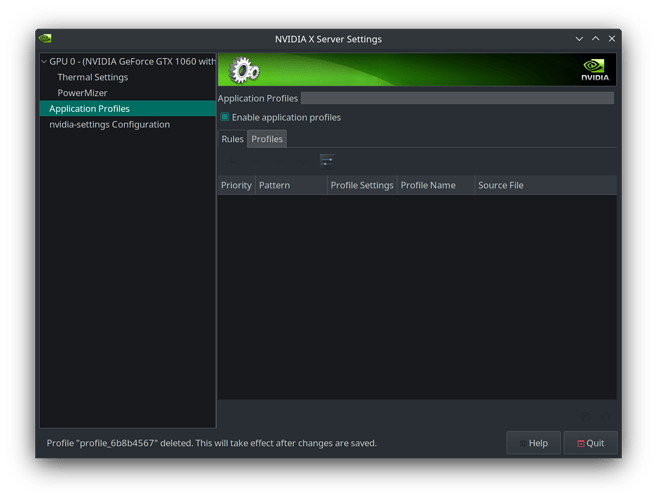 I also have an empty nvidia.conf file, and do not have an xorg.conf file. As a result I have no idea where the configs are. For the past months I have just been making things work with either lutris settings or steam launch options. I am in a situation where I want triple buffering in a game though, and I can’t find anywhere to set it. In windows I just had it enabled globally through the nvidia control panel, but on the linux driver it seems to let me only manipulate the power mizer, and the buttons don’t work well with the dark theme. Hopefully this improves at some point.