How do I remove zsh from konsole?

Preface: First of all, I read posting rules, but I’m bad at English (notice to moderators and admins) as I’ve been frequenting forums since 1995.

Now to the problem, I don’t like or need ‘zsh’ and I came here looking for how to remove it from my konsole and with that, I found the below mentioned thread:

Hi, I’m a long time user of Arch Linux however I’ve just installed Manjaro on one of my computers, I really enjoy it so far (a lot quicker to install if nothing else

) however: I have a bit of a problem. I really do not like zsh and would like to remove it. My problem is that there appears to be a lot of stuff connected to this. So, is there a “remove zsh” script or some guide I could use just to see that I get everything?

However, the tip does not work for the Plasma Desktop environment, and so that I have a terminal without ‘zsh’ in the plasma, I made the change in:

This will be overwritten without warning.

You cannot remove zsh due to a dependency of zsh by the manjaro-kde-settings package.

Always one of the most requested since I came to these parts, you say that @linux-aarhus 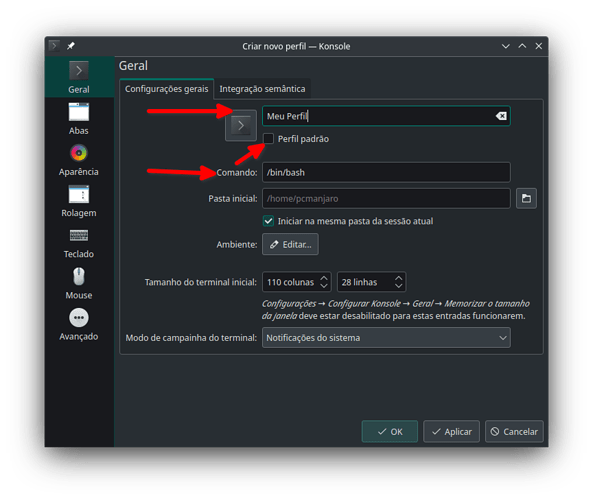 What do you say?

I don’t have KDE at the moment, but I still can come up with a description on
how you can follow @linux-aarhus diagram, to edit/create a Konsole profile where the shell is bash:

You can set bash as default in your terminal without removing zsh.

not just in any terminal app
but in Konsole, like Manjaro has configured it, it’s not as easy as you say …

This will open up another Konsole, but this time (hopefully) in englisch

hããã? I’m Brazilian and you want me to use google translate even to read “my system”, very unfeasible too, don’t you think?

As already mentioned here, the solution came through the message from @linux-aarhus

hããã? I’m Brazilian and you want me to use google translate even to read “my system”, very unfeasible too, don’t you think?

As already mentioned here, the solution came through the message from @linux-aarhus

You did mention that?
If so, I simply misunderstood.
Because I was pointing you towards exactly that.

It seems to go both ways.
It seems we misunderstood each other.

(we are from opposite sides of the world, after all
so this is not too surprising)

anyhow
T+ - which seems to mean: see you later

So we are sorry for the misunderstandings of the different languages

Wrong, thread asks about Konsole, which has its own settings for the shell, you need to set it there.

Wrong, thread asks about Konsole, which has its own settings for the shell, you need to set it there.

This I didn’t know, thanks for clarifying.