How do I open terminal commands from pop-shell launcher using anything other than the gnome-terminal?

As you guys know there is this laucnher built into pop-shell, you know the thing that shows up when to you press Super+/ (by default). There is an option on it where you can type “t:” and put any command you want to run, but I think it only runs those commands on gnome-terminal. But I’ve been trying to get it to run those command on the “Kitty” terminal emulator instead, how would I go about doing this?

Not quite sure what you refer with

as i don’t have such shortcut, it must be something you set that way.
For the default terminal, you can change that and make kitty the default one. You open up terminal and run:
gsettings set org.gnome.desktop.default-applications.terminal exec kitty

if you open up “layouts”, and click on Settings and switch on Window Tiling, it will show up when you press Super+/

Are you sure that is pop-shell and not material-shell ?
I use pop-shell and my shortcut is bind to Ctrl+F8 to get this, and i actually use a mouse button too to open it up: 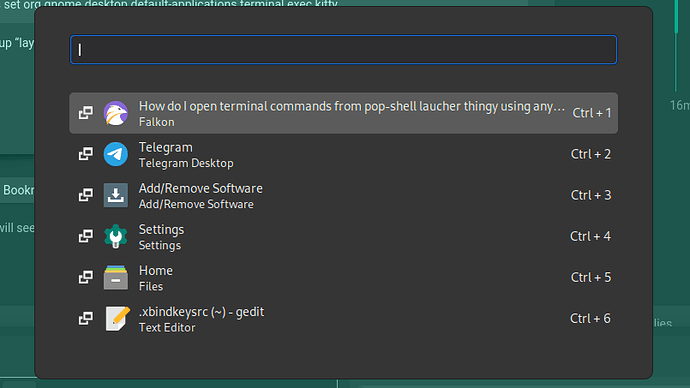 I can search for opened applications or other applications and open them up without opening them trough terminal.

Mine looks exactly like yours, I have left it as it was from when I installed manjaro. And I’m not saying you need to open apps trough terminal, I’m saying that if typed “t:” space and then “some command”, it would open that command in gnome-terminal, but I deleted gnome-terminal and am using kitty terminal instead, I trying to find out if it’s possible for it to launch the command on the kitty terminal instead.

I’m saying that if typed “t:” space and then “some command”, it would open that command in gnome-terminal

I need confirmation from other users, because that is not the behavior on my end.
t command
is not opening terminal
@Ste74, @Chrysostomus and @Yochanan - is there something i’m missing here?

as i don’t have such shortcut, it must be something you set that way.

It probably comes with pop-shell-shortcuts.

if typed “t:” space and then “some command”, it would open that command in gnome-terminal

It works as mentioned. (opens in gnome-terminal).
But I don’t think this behavior can be changed.

It didn’t work at first when I put it in ~/.local, and edited the main.js and logged out, but afterwards, I put it inside ~/.local/share/, then it did work. Thanks for the help, it worked!

But I must ask, why isn’t it recommended? what problems could doing this cause?

I put it inside ~/.local/share/ , then it did work

Sorry for the typos. Fixed

why isn’t it recommended?

I guess it’s alright to do it. Back when pop-shell was in active development (during its infancy), I remember having some trouble after updates.

May be someone more experienced will share their opinion.