How do i install manjaro on acer nitro 5?

I want to move away from windows since Microsoft adds memes like Cortana and this. A So far trying to dual boot win10 and manjaro has been a pain to do, not gonna lie. I made a 90 GB empty partition in win10 before trying to install manjaro.

I had a few problems trying to install manjaro. At first, I modified the 100MB win10 bootloader partition by giving it the /boot/efi mount point and the boot flag. I also made the 90GB partition into a root partition. When trying to continue to make my user, I would get a “no EFI system partition detected” warning. I was able to install w/o the warning popping up by making a 512MB partition w/ the fat32 file system, /boot/efi mount point, and boot flag. I also made a 20 GB root partition and made the rest of the 90GB partition into a home partition.

(read this Reddit post for extra information to the next part of this post.)
I was finally able to install manjaro but it kind of failed on me. Upon installing manjaro and rebooting, I was unable to access the bios. I was still able to access the f12 boot menu, so I was still able to boot into win10 and manjaro. I was able to get back access to the bios after following the steps provided by PlanetMercury in this thread here (scroll down a bit and you’ll find his post). I enabled secure boot, choose the grub file as a trusted boot option, and booted into the file thorugh the boot menu. I would get a grub rescue screen when booting into the file, as seen in the Reddit post. At this point, I was a little stressed and tired so I decided to get rid of the partitions after deciding that I install linux another day. I went into a manjaro live USB, opened GParted, deleted the 3 partitions I made, and got back my 90GB partition.

And this is where I am now. only win10 with no dual boot. I want to try again but I wanna know the steps i need to take so that it doesnt lead to the bios becoming unaccessible or being unable to boot into manjaro.

Here some Tutorials which could help:

Difficulty: ★★☆☆☆ Dual boot - Step by Step Target systems Firmware Checklist Windows preparation Manjaro installation Revisions Target systems UEFI Computers with preinstalled Windows (Windows 10) is computers using UEFI firmware. This guide is a generic guide targeted at UEFI installations. However some of the guide does apply even if you are using a BIOS/MBR setup. If you are using a BIOS/MBR (DOS) partition schema watch out for this

Any reason you go through the manual partition way instead of the automatic one? The Manjaro installer has a automatic way you just need to put what size you want to give to Manjaro and what size to Window 10 and it will do everything for you (Its the first one “Install alongside…”) 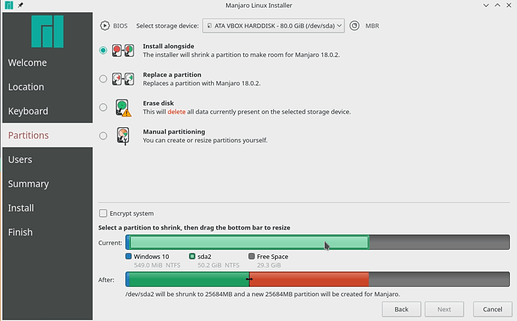 i do manual partitioning because i dont want manjaro to take up half my disk since i plan to use manjaro for general things like browsing stuff and not gaming so giving it a 80-90 gb partition will do.

That was I just said

When you select the Windows 10 partition,it will appear a slider where you can adjust the new partition for Manjaro,so just drag it to 80 GB.

I don’t have experience with manual partition,but in case you create the partition separate,the second option “Replace a Partition” doesn’t work for you? I don’t know if that creates the boot on the /boot/efi as well.

Also make sure secure boot is disabled to avoid problems.

sorry didnt read carefully. i didnt know you can allocate storage for the manjaro install through the install alongside windows option. all the manjaro dual boot tutorials i watched went through the manual partitioning option.

so i plugged in my usb and opened my boot menu to get into the usb but i noticed that there was a boot entry from my previous attempt at installing manjaro. it was a efi boot file that i named yes. booting into the file just brings be back to windows since i guess it doesnt detect the file anymore and goes to top boot priority which is windows. I booted into my ventoy usb, launched manjaro and ran efibootmgr -v in the terminal. Here is the result. is it ok to delete the boot entry?

I’m not sure,if there is another efi partition then maybe yeah you can delete it,but don’t take my word on it,maybe someone else that knows better can answer that.

ive deleted the ESP and the root and home partitions. i tried deleting the boot entry by booting into manjaro usb, opening terminal and running efibootmgr -b 0002 -b (0002 is the entry for the boot efi file). after running the cmd, i saw that the boot entry was gone when it showed the updated list of boot options but when i went back into bios and boot menu it was still there. I went through the select file as trusted boot option but didnt find anything relating to linux or manjaro except for my usb. removing the usb didnt do anything since the entry for the efi file remained.