How do I increase the screen Brightness Reduction Timer in Manjaro beyond the allotted 120 seconds in the GUI?

SO I’m pretty noob at this stuff still, maybe this is a lot to ask, maybe its simple and i just haven’t been looking in the right places, but!:
I want to change my Powerplan to do the dimming of the screen and nothing else.
I however would like the change the amount of time after which it does this to exceed the GUI or maybe application allotted maximum 120 seconds.
I am of the opinion that dimming the screen after a while is the most impactful change to a pc or any device’s energy footprint but also reduce it standing out.
IF im wrong on that i would say that maybe if the context is where you get to keep most of the functionality, application stability, least likelyhood of user error (maybe not but i think so).
I would set it to be less likely during the day since its so bright out. more likely evening times with a prompt to keep it off past sundown.
Also, a widget and hotkey to switch to that dark mode at all times.

TL;DR
How do I increase the screen brightness reduction timer in manjaro beyond the allotted 120 seconds in the GUI?

Settings > Power Manager > Display
You can set it to 60 minutes top. Play with the sliders till you get what you want.

My question is about the setting right below these.

How do I increase the screen brightness reduction timer

in the context of you being not satisfied with the

and i showed you can increase that maximum …
increase and bellow are not synonyms nor homologous.

You can set those numbers to One minute or to Never, just use the slider. There are no 1 second increments tho. 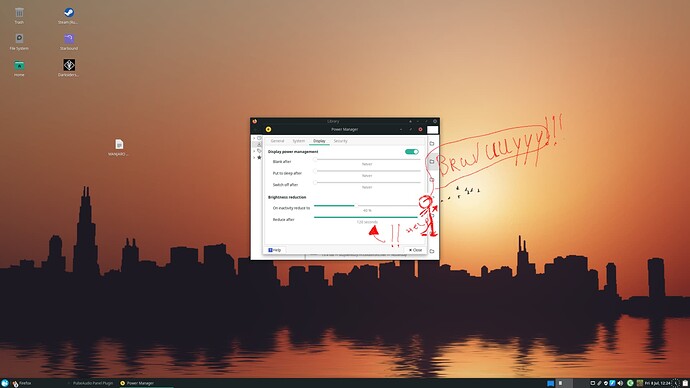 Or probably this will help https://askubuntu.com/questions/1015701/display-turns-off-too-soon

I saw this setting and saw a solution to my problems, theory crafting a vision afterward.
i just put it at 1% and 10 seconds and I can guarantee you that it does not even work. That will be my next pursuit. Then, this ubuntu article looks promising thank you, I may have previously disregarded. I will see when and how it works to update on this solution.

How to set up screen brightness slider in Manjaro XFCE (or probably any other...

After installing Manjaro XFCE, an Arch Linux based Operating System on my old laptop, there was an issue I faced. The old laptop keyboard…

For now I’m keeping it at turning it down for the night with the github tool listed below.
Also took some blue out of the color cuz sometimes that’s nice, it’s pretty cool.

Can't adjust screen brightness (Lenovo Laptop, NVIDIA, XFCE) - #7 by persalteas although im mostly using amd i think my answer is somewhere in here but i do not understand.

I think it must be a simple problem.

My configuration and automation wishes?
I am of the opinion that should also be a simple problem.
Even if i have to learn some stuff first.