Hello! I’m having an! issue with my radion rx 590, when my system boots up after post my system throws this harsh gravily image up on both my displays(pics included). I tried a few fixes on my own but those didn’t work as I intended them to. I ended up switching from kernel 5.8.16-2 down to 5.4.72-1 as the issue doesn’t seem to occur on that kernel unfortunately there’s a dependency on kernel 5.8.16-2 so I cant remove it and just run 5.4.72-1 so I’m trying to fix the issue on kernel 5.8.16-2. 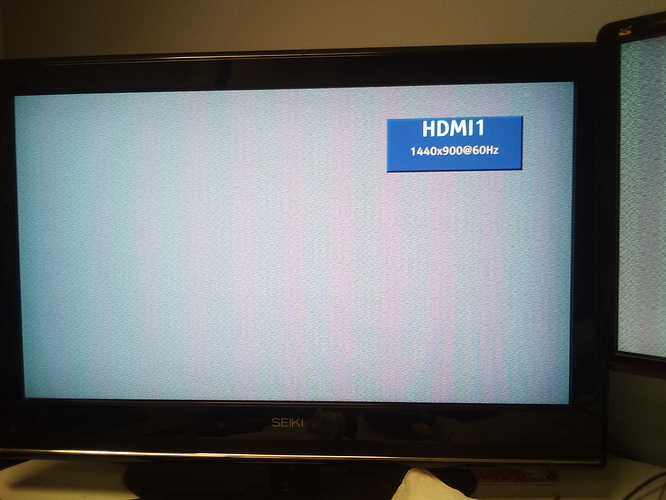 Same issue with rx580. it seems like rgbw noise but the resolution changes every few seconds. mine boots to login randomly after several reboots.

I also get graphical glitches with chromium based browsers, firefox can’t play videos.

The fans won’t stop unless I manually tell them to in corectrl.

My system won’t shut down either. Do you have other issues as well?

its funny, I bought an rx580 because the drivers were in the kernel so i assumed it would work out of the box. This has been a worse experience than my nvidia optimus laptop lol.

I don’t have any issues with my fans and after a few seconds, it boots to the login like you said accept I don’t have to reboot. in terms of chromium and video playback, I have no issues. This has been easily the worst GPU issue I’ve ever had. hopefully, we can both find the fix. I really don’t want to wipe and reinstall my system

Interesting, I’m running a RX580 and Cinnamon and everything is fine. Maybe check if you have the package xf86-video-intel installed and remove it? BIOS up to date? Double check with another Radeon card if you can?

how would I go about checking to see if xf86-video-intel is installed? sorry, I’m new to arch based systems. ill see if I can scrounge up an older AMD card if I can for testing and see about updating my bios

The simplest way is to open Pamac from your start menu. It’s called ‘Add/remove software’ in the menu. Type to search and it will filter all alvailable packages. If a package is already installed, this is indicated by the “Remove” button. You can also select the list of ‘Installed’ packages in the left sidebar and search for the packagename there.

From the command line: pacman -Qi xf86-video-intel. If that outputs that the package was not found, it was not installed, otherwise you’ll get some system information about the package.

I found xf86-video-intel through the graphical package manager and removed it to no avail I’m afraid. im going to look into my bios next. do you know a good resource for learning more about pacman/pamac?

You might actually need that package since your processor also has an integrated GPU and its Intel. I’m a little confused, though, because it says you have an i5-4590 AND an Intel Xeon E3-1200? Either I’m confused or the computer is. Its probably just me though xD

I just have the i5-4590 CPU. IDK why it lists the Xeon E3-1200 although I think it’s possibly just the name of the integrated graphics chip/controller

Okay I know this doesn’t help your current problem, but you’ll need those Intel packages since you have a hybrid system.

Do both of your GPUs have an HDMI output or do you just have one HDMI? If it’s just one, do you know which gpu it is connected to? It should be the Intel one.

I reinstalled the xf86-video-intel package. only one of my GPUs has an HDMI output and its the RX 590 which is what I’m using for my second monitor

oh man then I don’t know what else to do. Sorry. Hopefully someone else reading would know. goodluck!