Since on of the last updates, Guayadeque is not working anymore. This problem happend already one time and somebody fixed something but I don’t know exactly what. I can’t find the thread anymore, it was part of the old manjaro forum.

When starting guayadeque via terminal:

I’m a linux newbie, forgive me

Since on of the last updates, Guayadeque is not working anymore.

Guayadeque is in the AUR. You need to rebuild it against the new libraries. This happens often with AUR packages.

Just reinstall Guayadeque and it should work again.

I have installed Guayadeque from the official repositories, not from AUR. I always use the official ones, because stability is most important for me. With AUR sometimes things I happen, I don’t understand. And then updates are not working.

I have removed guayadeque from official repositories and installed it again. Same problem. I have also another machine runnning with Manjaro and have exactly the same problem there.

Guayadeque is getting old - however, it’s my favourite.
When it failed, I went to yay and chose another option - it’s working fine; give the git version a spin

The most annoying bug for me right now is it doesn’t mark podcasts as listened until it gets restarted, otherwise it’s fine.

Thanks for your proposal, but guayadeque is the “only working” music player for me, because the rating of a song is saved in the mp3 file, and not in the database. I’m syncing my music between several computers, and it’s the only way currently to also sync my “most favorite songs, most played, latests added songs …” and so on …

So therefor I must guayadeque get running again

And it’s in the official repositories, so it should work … ?!

I’m just saying - when it stopped working for me, I installed the git and it’s working. 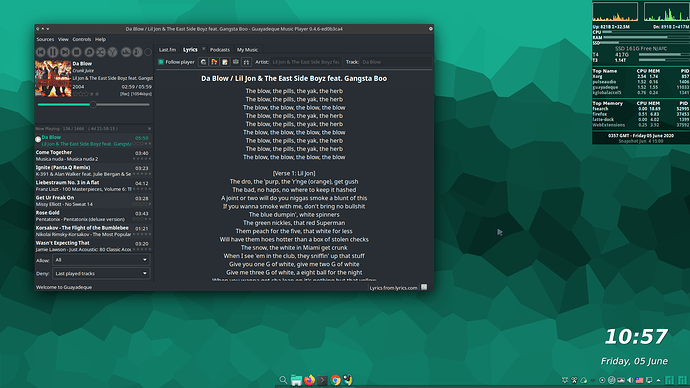 thx, it’s working. I’m new to manajaro: Is there any option to send a bug report?

I’m new to manajaro: Is there any option to send a bug report?

It also has a github page - easy to track down these things with duckduckgo you know?

There isn’t much going on with Guayadeque TBH.

But this seems to be no bug of guayadeque itself, it’s more or less a bug in the Manjaro Package/Dependency system. So I would need to make a bugreport to the guys maintaining the official Manjaro repository. But there is no Bug-Report-Tool on the Manjaro Website.

Well I switched to try it - no issues here.

Okay, so it does not matter if I install guayadeque from AUR or from official. It’s always the same Error message. And this on two different Computers. Of course they have almost the same configuration, but …

So what would be the next possibility to check? What is this libjsoncpp.so library?

Guayadeque from official Repositories is working again since an update. I would be so intrested what was the problem, but it had to be fixed by Guayadeque or Manajaro themselves.