When I boot my laptop I get the following messages before the grub menu appears: 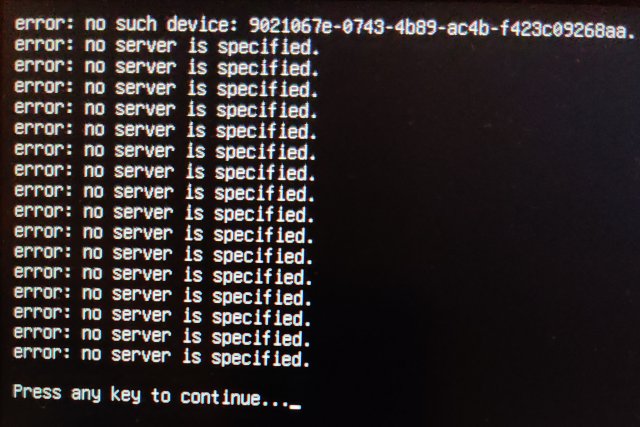 It times out by itself or I can press a key, after which the grub menu appears and I can continue to boot the OS without problems.

This install was done manually because I need a custom partition layout with encryption and lvm. This went fine (I’ve done similar installs with Archlinux in the past so I am familiar with the process) and I ended up with a clean minimal install (no DE). Next I restored from a backup the root partition with the exception of /sys, /proc, and some others and made sure not to overwrite some important files. Mainly, grub.cfg, /etc/default/grub, mkinitcpio.conf, fstab, crypttab.

I must have forgotten something because I got a grub rescue prompt. I fixed that with a live boot and manjaro-chroot in which I reinstalled grub, ran mkinitcpio and grub-mkconfig. Now it boots, but I get those weird errors first.

The UUID mentioned on the first line is the LV for my root filesystem.

In /boot/grub/grub.cfg I find the root LV mentioned in the error, but I think that’s correct, as grub-mkconfig finds that during grub-mkconfig.

In short, I’m not sure what’s wrong so if someone has an idea I’d be grateful for it.