Google Chrome 90+ have broken hardware acceleration. Is there a reliable way to downgrade?

Hey guys!
Since versions 90+ have broken hardware acceleration I want to get back to version 88-89.

Unfortunately google does not provide older versions and I don’t have it in my cache.

So, the question is: What are my options for downgrade in such situation?

Any help appreciated! Thanks!

Because of security reasons, I strongly recommend never to use outdated software and especially browsers.

Is the issue present in Chromium as well? Then you can file a bug report against it.

As google-chrome is an AUR package - you could clone the package - set the version to the one you know is working - then run makepkg and install the resulting package using pacman.

This is not tested and relies on the google-binaries still being available from upstream.

But doing so is not without possible implications as the google-chrome binaries depends on a few other separate packages - which may not be compatible with the older version.

If you can use the chromium version - then you may be able to use the downgrade script and select an earlier chromium version matching your requirements - but even then - still consider the possible implication from such action. 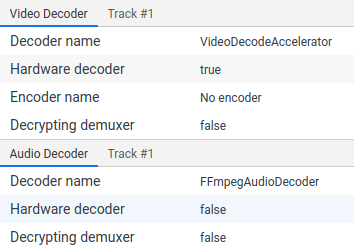 Note: This doesn’t work on Wayland. You can use VA-API on XWayland, using the --use-gl=egl command line flag (untested). 1. Enable the following web browser flags:

Warning: Disabling the rendering blacklist may cause unsta…

yep, it should be mojo player. Now it eats lots of CPU

it should be mojo player

Just because it’s no longer called MojoVideoDecoder doesn’t mean there’s no hardware acceleration. As you can see in my post above, it’s now called VideoDecodeAccelerator.

Now it eats lots of CPU

Of course I have configured my chrome with this howto post. Thank you for it, this post was very useful when I used it for v88-89. But now this VideoDecodeAccelerator eats my CPU(I have the same config as v88 had).

Oh, just turned off --use-gl=desktop and now it uses VpxVideoDecoder and utilizes CPU even more… Seems there was hardware acceleration after all… But it still uses twice the CPU compared to mojo

Broken on my side too. I’m seeing “FFmpegVideoDecoder” as the video decoder. It was working OK with older releases.