Recently my 9 year old dual boot MacBook Pro(OSX/Manjaro) died. Rather than try to resurrect it, time for a new machine. On Phoronix I came across this article 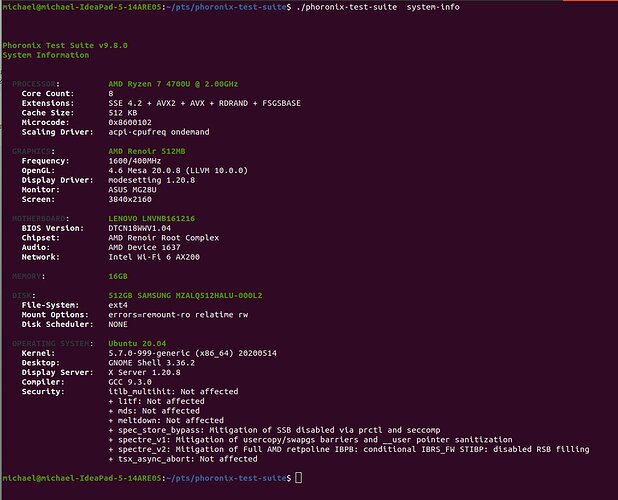 For about one and a half months now I have been using the AMD Ryzen 7 4700U as my main laptop paired with Ubuntu 20.04 LTS

which I found interesting and am considering a 4700 based machine for the replacement. My question is very general but are there more problems with AMD laptops using Manjaro?

AFAIK CPUs don’t have any problems. GPUs on the oher hand…

The latest 5600/5700 AMD GPUs were buggy to use, also on Windows, but recently the drivers have stabilized. You should be safe with the 4700, but I’d wait a month or two before buying any zen3.

Many thanks for this, just the kind of info I am looking for.

I have a lenovo Ryzen 4500U (ideapad flex 5) and the most recent kernels 5.7 and 5.8 run well as long as the BIOS firmware is up to date. 5.7 still runs a little better than 5.8, but that should change after a couple more maintenance releases.

See this archived thread. Most of those issues are resolved in the newer kernels. There is at least more ryzen 4000 thread archived at the old forum.

I should make a distinction here for those not familiar with Ryzen.

The Zen3 CPUs use a new manufacturing process, and from what AMD says, are internally different. It may take a month or two for them to become stable on Linux. Then again they may run great from day one. With new hardware, it’s always best to wait and allow others to test before buying.

jbMacAZ
Thanks for the excellent link to the archived thread. It also has links to some of the posts on Arch regarding this…great information!

Twifty
The new laptop will be in some 50+ years of computing (I am 69) my first AMD processor. Looking forward to it. Great rundown on what Ryzen is, it helps to clarify things for those of us raised on Intel and wanting to divorce it going forward. I did a web search on the Zen 3 and found a lot of information about whats coming. When Zen3 comes out Zen 2 based laptop prices should go down no?? I also want to build an AMD desktop but that will definitely have to wait for closer to the end of the year…

thanks to you both for the great help.

When Zen3 comes out Zen 2 based laptop prices should go down no??

Regarding laptops, probably not. It really depends if they also release Zen3 mobile CPUs at the same time. Going by their previous years releases, the mobile chips usually come out much later. When they do eventually come out, then you will see a price drop.

Desktop CPUs are a little different. I currently have a 2700X, when Zen3 comes out I expect all 3000 series CPUs to see a price drop. I plan on buying a 3800X and gifting the 2700X to my son. I’ll probably not be buying a Zen3 myself. But, I’ll see how the reviews go before making that decision.

Thanks. Didnt realize that the mobile chips are out later.

We have followed a very similar path. My prior machine was a 2011 MBP with 2.5GHz Core i7. I finally decided it’s time I not count on that lasting, after the third motherboard replacement and now a failed discrete graphics board requiring nvram settings to get it to boot.

I replaced it with a new HP Probook 455 G7 with Ryzen 5 4500U. IMO, this CPU is incredible for the price. As a budget laptop, it’s about 2x faster than the older high-end MBP, and about 1/4 the MBP’s price when it was new. The thermal performance is outstanding, with palm rest remaining cool and no fan activity during daily driver tasks like browsing, email, etc. When the fan does start, it’s louder than I’d like it to be, but I’m quite picky about that. CPU performance is very good (I mainly do development in Go and C, plus standard productivity tasks).

As for what might be HP Probook specific, I took some time to get signed secure boot working with custom certificates using systemd-boot, and that is all working well with the firmware. I don’t like the trackpad quite as much as the one on the MBP, but it’s adequate.

I’ve been very impressed overall with the hardware compatibility in Manjaro thus far given how new a machine it is. WiFi, Ethernet, sound, and graphics have worked just fine, with a few caveats…

While kernel 5.6 boots to graphics without a problem, kernels 5.7 and 5.8 show this message at the console:
[drm:mod_hdcp_add_display_to_topology [amdgpu]] *ERROR* Failed to add display topology, DTM TA is not initialized.

However, graphics does still work. To get to the login screen, I just switch to another virtual console (ctrl-alt-f2) then switch back to X (ctrl-alt-f1). All is well until the next reboot.

There is noticeable tearing during video playback. This fixed it for me:
https://wiki.archlinux.org/index.php/AMDGPU#Tear_free_rendering

There is no driver available for the fingerprint reader, than I know of.

I think that error is about iommu, there some post in the forum with some options to fix it.
I had the same problem in my r5 3550h but was fixed with kernel 5.7 and his firmware update.
Just can say, ENJOY IT!!!

When you installed Manjaro, did you choose free or non-free driver for AMD’s iGPU?

There are only open (‘free’ is a misnomer … but whatever) drivers for amd.

Thanks. I’m considering to get a unit of Yoga Slim 7 4800u and run Manjaro on it.

Hey bob418,
just read the Toms Hardware review of the machine, I want one too. I doubt if I can get one here in Ecuador but…maybe elsewhere. As long as we are on laptops with my having looked pretty extensively at Lenovo and others…and since my old MacBook Pro DID have an ethernet port… I have a question-- when you get an update and the machine doesnt boot its great to be able to chroot into the NF operating system and affect changes.What happens for example if Wifi has cacked because of a bad driver…and you can not get online to get another wifi driver for example…and no ethernet port…what then?

I also ask because I anticipate using the laptop with Software Defined Radio applications and sometimes wifi latency(compared to SDR on ethernet) can be really objectionable depending on what you are doing…so an ethernet connection would be desirable in my case and for system maintenance what do you end up doing to get online from a terminal if the system wont boot and wifi no longer works??

The answer is adapter.
In my experience so far … I havent had one fail to recognize the ethernet.
(and as more and more laptops dont have ethernet, or only have thunderbolt style connections, etc… I now have a little set of them and always keep in if I know I will be traveling. Funny, I know … but it aint terrible … it also adds some extra functionality like sd cards etc.)

Hi cscs
Thanks very much for the info on the adapter. So you are good for getting online from CLI for troubleshooting without too much of a song and dance then thats good to know. The only other question is about latency-- for example the Apache Labs Anan 7000 series software defined transceiver uses ethernet connection to the computer rather than USB because of data rate and latency as do a number of other SDR’s. A thunderbolt adapter/connection probably would resolve this although its somewhat difficult to know.
Many thanks for the kind info.
Regards 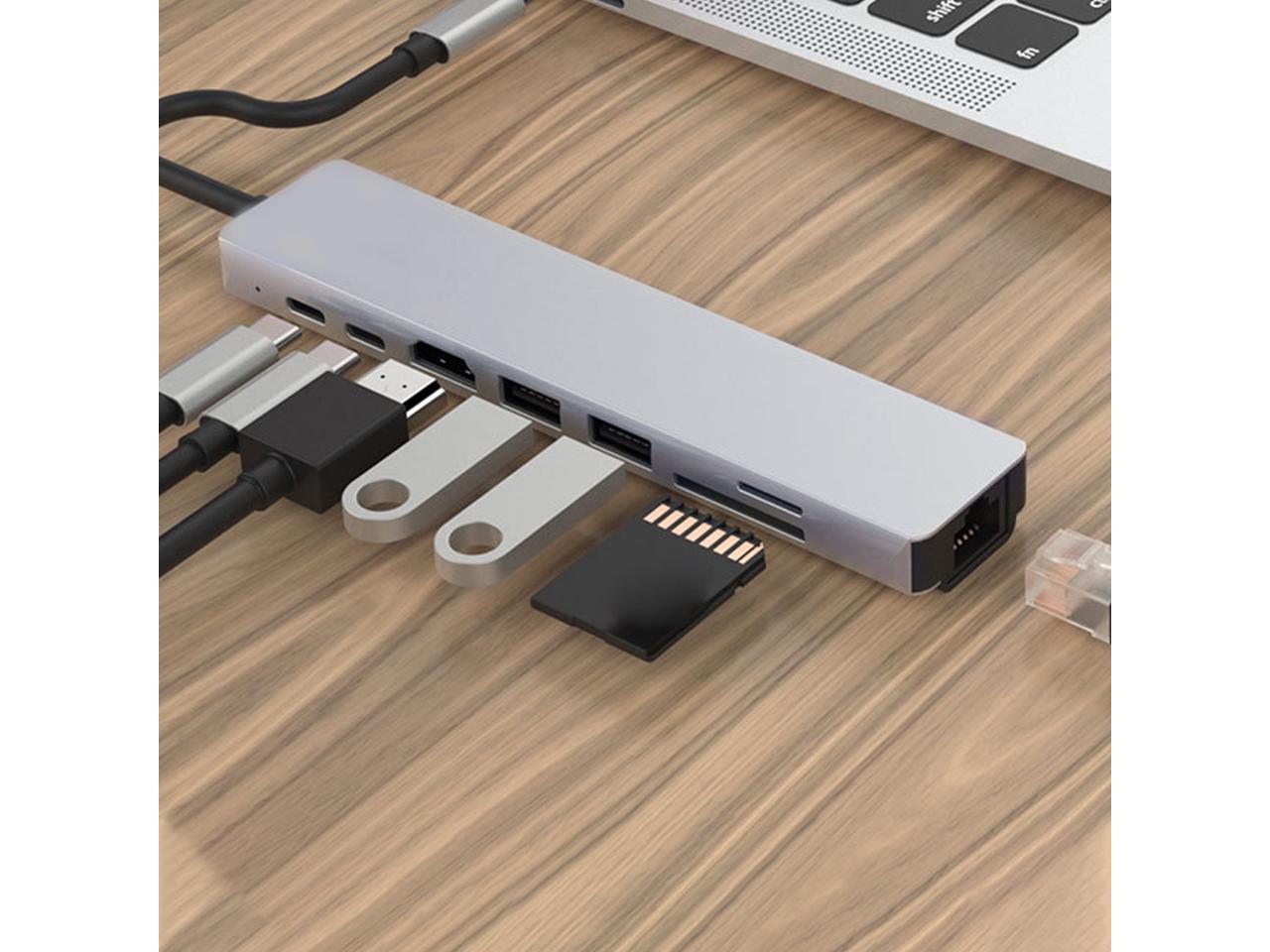 1280×960 99.2 KB
and has so far worked well, including booting from USB - heck some machines it wouldnt be possible otherwise.

(never did do speed tests on the ethernet exactly … though seemed to work like normal LAN)
But I am sure it probably depends on the internals of the machine too of course … so yeah I wouldnt go so far as to speak for all devices.
1 Like
expat September 2, 2020, 2:38am #20

So thats a thunderbolt adapter. Thats just neat as can be. I imagine given thunderbolt speeds latency might not be a problem. Thanks very much for the great info and photo. WOW.