I’ve been testing out Manjaro on Virtual Box within Windows 10. Currently running an intel CPU, an Nvidia GPU, and Plasma as my DE. Booting with the proprietary drivers from the initial load-in screen.

I do the initial setup via the GUI once I get onto the desktop, and then it prompts me to restart, which I do. Upon loading back in, I check the “Software Update” tool, which has the list of all the packages that have an available update. I click “Apply” and it begins downloading and then checking the files. At some point after that, the screen goes black. I still have the cursor on the screen, but there isn’t much else I can do. 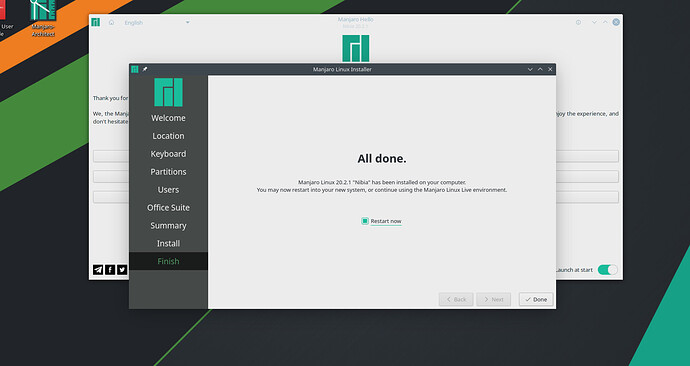 Update tab with all of the available updates: 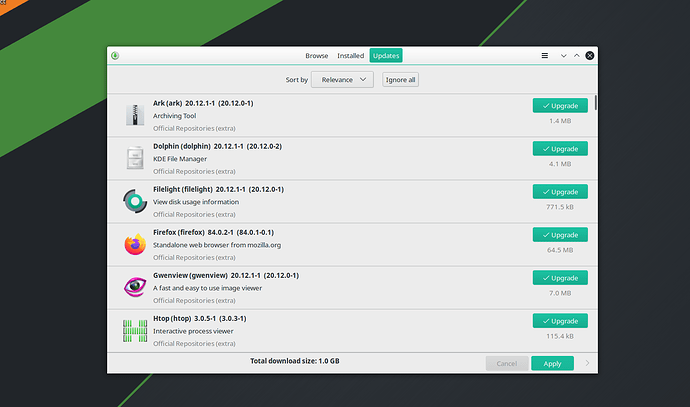 Any help would be greatly appreciated. I have been all over the forums today and reading as much as I can, but my guess is some incompatibility.

Just to clarify and be sure:
after the completed installation you shut the machine down and you removed the installation media and are now booted up in your freshly installed system?

Beyond that I can’t be of much assistance since I never used Architekt nor do I have similar hardware (Nvidia).

And you dedicated your nvidia GPU to the guest OS aka Manjaro and is not used by your host OS aka Windows as described here 2.5. PCI Passthrough ?

Booting with the proprietary drivers from the initial load-in screen

If you are not using PCI passthrough then your guest install of Manjaro is using the VBoxSVGA graphics controller, or is not properly set in your VBox machine Settings.

From the screenshot it seems you installed the updates on the Live Media, see the ct text in the top your-left corner … is part of the Architect shortcut. As @Nachlese mentioned, make sure you remove the install media.

First off, thank you both so much for the quick replies.

Secondly, I believe the root of the issue was not removing the installation media. After doing that, and re-running the update, it works.

Regarding the VGA config for the VM itself, I am using what I believe was the default option in Virtual Box, VMSVGA.

Thank you both for your help! I really appreciate it.

Regarding the VGA config for the VM itself, I am using what I believe was the default option in Virtual Box, VMSVGA.

the recommended setting as of right now is VBoxSVGA - but if it (VMSVGA) works … it works
good
setting it explicitly to: VBoxSVGA will cause Virtualbox to nag you or even keep resetting on minor other changes and keep fighting you in other ways - even though it is, indeed … recommended