Followup: HDMI to any monitor/TV shows a blank screen, but is detected

Wow! If blacklisting the AMD GPU and running on pure nVidia without Optimus doesn’t solve the problem, I’m all out of ideas now…

So… no optimus-manger would be better?

I don’t understand some of this configuration, right now I’m using optimus-manager-amd-git from the AUR…the PKGBUILD and .install file for it is listed in the comments… it installs a lot of empty .conf files that don’t get installed with the latest version of optimus-manager (v1.3.1)… I know AMD support was merged but I’m not so sure all of the functionality is there or I don’t think I’d be following up on this. My current optimus-manager version:

I’m gonna try a few things over again and see how it goes. I might try all nvidia again. I think the problem with my AMD setup is that the Ryzen has integrated graphics and that seems to be primary no matter what, even if I blacklist it. When I blacklist it, it just crashes lightdm–I’m going to attempt a different driver setup… again. I can only say so much. I’m also running out of ideas.

Also… optimus-manager-qt was never functional for me in Cinnamon as far as I can tell. Command Line is what I have to use. (not a problem)

Well, the AMD-nVidia GPU combo is fairly new, so it’s worth a try uninstalling the hybrid drivers and going for a single driver:

(I’m also still on the 440 series until the next iteration of the kernel as there were issues with the 450 drivers.)

You’ve tried everything so far, except this and if you’re comfortable with TTYs you might as well try because you’re going to end up at one point without any graphics drivers…

Yeah that’s where I’m at right now – with a browser window. I’m gonna try all sorts of combinations and see if any give. It’s a Saturday morning so I’ve got some time to waste.

Tell me, @Fabby… what were some of those driver issues that you had? Does it have anything to do with vicious screen tearing with the 450xx series?

what were some of those driver issues that you had?

Me? I had none! I stayed on 440 and didn’t upgrade because I have a GeForce GTX 1070 and there was no compelling reason to upgrade, but I saw a ton of issues for other users that I helped solve by telling them to downgrade if they didn’t have a GTX 2080 or newer…

Once I see the number of problems here with the 450 series go down to a trickle, will I upgrade myself.

P.S. I used to be a software developer and a System Engineer:

Yeah, I have a GTX 1650… I mean, I thought it was supposed to be pretty good… It might not be the best, but by now, I thought that nvidia’s proprietary drivers wouldn’t be any issue… for any OS…

What’s weird is that 440xx series for the hybrid driver doesn’t work at all, doesn’t boot… but 450xx hybrid works now, amdgpu seems to actually work better than this nvidia with even simple video rendering–there’s screen tearing whenever i switch over to the nvidia gpu and it shouldn’t be that way… and now even with the proprietary hybrid driver installed, optimus-manager (v1.2 – the amd-git one) is what seems to work, and the nvidia gpu is VERY slow it seems, the screen tearing is absolutely dreadful… I’d think mixed with this CPU that it’d actually be pretty decent overall, out of box… i mean i haven’t even played a game of any kind yet–I’m just talking about normal video rendering… Normal video rendering is absolutely dreadful if I switch over to nvidia–the performance is just dismal. Even if I scroll fast on these forums… even then I can see it.

On my external monitor, it seems to be okay … not great, but still decent… for video rendering in a browser anyway. I tried the nvidia x server settings but nothing stopped the screen tearing aside from “Force Full Composite” etc… it works on the monitor, but not on the laptop display. I’m not sure I understand why. I came across something someone posted in another thread… Someone with a hybrid/amd/nvidia setup basically confirmed the hybrid drivers conflict with the nvidia ones. He’s right, they do. That is, if you install it with hybrid drivers. That was what I should have said. It’s basically required for my setup or the display manager just… goes haywire. lightdm is the wonderful display manager i’m running (Cinnamon DE). Plus, the hybrid-450xx seems to be the only one that has both of these GPU’s boot.

That all being said… it’s still a step in the right direction somewhere. I thought I made sure that optimus-manager.conf is configured CORRECTLY. The screen tearing for the AMD Renoir (integrated/hybrid) is non-existent and the driver seems to be very well written, actually. Not sure if I can say that for nvidia. Would open source nvidia drivers work, i.e. passing nvidia_drm=1 ?

I don’t know. Sorry, that was a lot of talking. And no, issue is still not resolved.

Which is why I’m on the pure nVidia driver: nVidia doesn’t work well together with other companies especially AMD and why there was a kerfuffle a while back and the Linux Kernel team is threatening to remove nVidia support if nVidia doesn’t start behaving itself a little better;, I’m expecting another statement from Linus like he did 8 years ago.

Those are not the open source drivers. These are but I haven’t tested them in the last 5 years or so because my experience has been fine with the fully proprietary drivers (no optimus here)

Sorry, that was a lot of talking.

I feel for you!

Those are not the open source drivers. These are but I haven’t tested them in the last 5 years or so because my experience has been fine with the fully proprietary drivers (no optimus here)

No they aren’t open source… I’m asking about passing nvidia_drm=1 for a kernel parameter in grub. I apologize, I wasn’t specific enough… it’s a suggestion for ubuntu, linux mint, etc. I’m asking if you think it would help for screen tearing with nvidia.

I’m not worried about it… I’ll try adding it; it’d be temporary as I wouldn’t be editing /etc/default/grub.

I’d be doing a temporary thing… lol. Just gonna try it at boot. This is what I did with blacklisting amdgpu as well.

I’ll report back. Thank you for all of your help so far. You’re better than so many others that just don’t want to deal with people as stupid as I am with Linux. You’re also really patient. So… thank you.

It did nothing that seems to be of any change. I’m not sure why screen tearing is so horrible with this.

prime is definitely just amd and nvidia drivers, nvidia proprietary… amdgpu isn’t, as far as I know, or it’d be AMDGPU Pro wouldn’t it? … Anyway… AMD has nothing to do with this. This is ALL nvidia. Can I show my optimus-manager configuration so that you can see why screen tearing shouldn’t be happening?

I’m not sure why but it doesn’t seem to matter which driver version I’m using now. It’s still horrible on the nvidia side. What’s even more strange is that when I was having this problem before and I had been using the configuration that started this thread… lol… that part is solved, but now we’re running smack dab into the issues i really don’t enjoy having. I can’t even watch YouTube videos.

On Linux, you can have those two cards, but use only one GPU for both monitors and then the other GPU for certain apps.

Out of curiosity I installed Artix (-plasma-runit) for other reasons not related to display management, and was amazed to see that it supports two monitors hooked up on two different GPUs (mobo’s Intel, and modest Nvidia GT730), right out of the box. Both monitors display (different) backgrounds after booting and logging in. In system settings --> display configuration the two screens are shown side by side, to fiddle with their settings.
I wonder why it seems so difficult to achieve the same in Manjaro, given that both distros are based on Arch.

Is this a laptop?

The only thing you haven’t tried is pure nvidia only:

and I’m throwing my hands in the air:

Out of curiosity I installed Artix (-plasma-runit) for other reasons not related to display management, and was amazed to see that it supports two monitors hooked up on two different GPUs (mobo’s Intel, and modest Nvidia GT730), right out of the box. Both monitors display (different) backgrounds after booting and logging in. In system settings → display configuration the two screens are shown side by side, to fiddle with their settings.
I wonder why it seems so difficult to achieve the same in Manjaro, given that both distros are based on Arch.

As far I am aware, two different screens used by different GPUs is a more advanced pass-through configuration and since there are too many possible configurations, there is no automation here.
What you describe can be as well achieved with any GPU. In Plasma, when I hook up another monitor, it is detected, I have proper configuration for them, I can set separately wallpapers and other settings.
With Nvidia, separation is even bigger.
So I’m not sure if that what you saw is really a pass-through configuration (each GPU is displaying picture on different monitor) or simply well presented and done configuration of multi-monitor setup.

I’m no expect on that matter, so I can be wrong about it thou

The only thing you haven’t tried is pure nvidia only:

and I’m throwing my hands in the air:

Yeah… I did this before and it just wouldn’t boot up, but it booted up this time with video-nvidia-440xx… there has been no change at all with screen tearing,

Go ahead and throw your hands up. I’m pretty sure I just have something wrong with my configuration… it should allow me to do it with Option “TearFree” “true”… but that doesn’t work. I’m 100% sure I’m not alone in this…

Are there any further steps that I could be missing? I’d like to think that proprietary pure-nvidia drivers would work… but the screen tearing makes this absolutely dreadful and impossible to watch anything… and I kinda have to use this, I don’t have a choice I don’t think…

but it booted up this time with video-nvidia-440xx… there has been no change at all with screen tearing,

We have a minor development that I overlooked:

But before I show my screenshot, here’s the deal… it’s nvidia that has the tearing, not prime… I went back to it since it didn’t seem to matter. It’s gotta be some sort on config that I’m just… not seeing… and I do --cleanup for optimus-manager as well.

Tearing is only eliminated on an external display, not on the laptop display. So we’re half-way there. But here is the problem… and I tried it through xrandr… but it looks like there’s just somethin’ I’m missing. @pobrn and @Fabby … hope you have input of some sort… 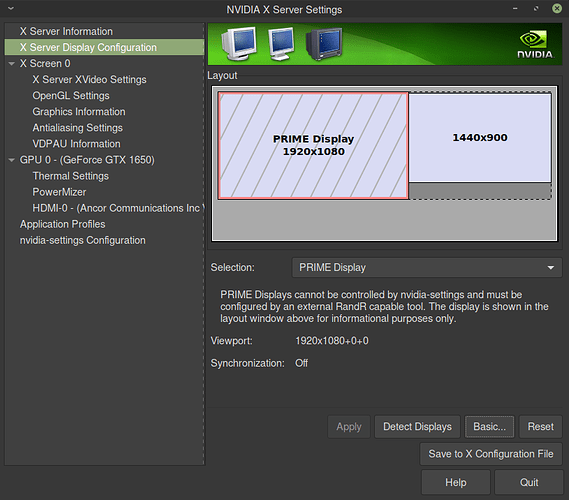 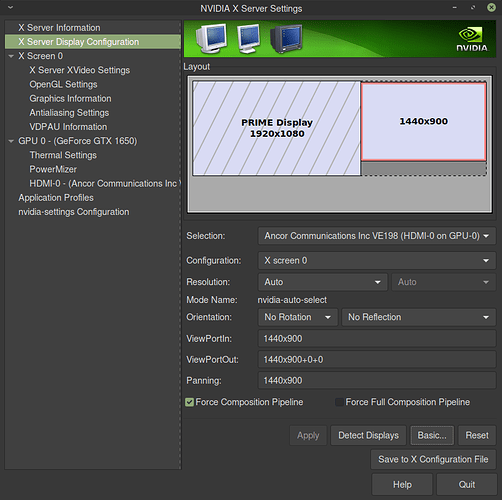 Please carefully look side by side… the second screenshot is obviously considered the external. I’m using optimus-manager, but the screenshot is from nvidia-settings. I’ve been getting a lot of flickering on the external display… but regardless, I kinda need to figure out what’s going on here… the flickering is nothing and it’s a known problem. This is different. Any ideas?

Tearing is only eliminated on an external display, not on the laptop display.

That’s interesting, since I don’t remember ever seeing tearing on the internal display in my case.

So many things have changed since the beginning so I’m lost which config you’re running on now: nVidia or Hybrid?