Yesterday I started experiencing an issue that didn’t use to happen just the day before: Firefox will sometimes not prevent the screen from powering off when running a fullscreen application, such as games or other pages that support the mode. Playing Youtube videos still seem to prevent monitor standby accordingly, but other fullscreen elements no longer do.

I use Firefox 107.0 on Manjaro Linux (KDE Plasma) running on the amdgpu video module. Is this a known bug and already known or should I go ahead and put it on the bug tracker?

Have you tried with a fresh Firefox profile ? If you do, keep a backup of yours just in case …

Tried it just to be extra certain, same issue even with a fresh Firefox profile.

fullscreen application, such as games or other pages that support the mode.

Is it possible to share such an example? I can try it two different systems running Manjaro + KDE. (One is still using KDE/Plasma LTS 5.24.7.)

Yes, seems you can reproduce this on Youtube: Put a video in fullscreen but pause it. If the video is paused the monitor will go to sleep even if the window is fullscreen. While in this scenario it’s not such a big deal, other fullscreen applications that let you watch without interaction have issues over this. 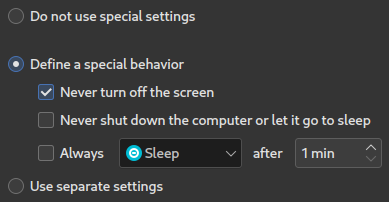 and you use it for watching media, can you reproduce the issue?

I only use one activity, though that’s a good feature to be aware of. I presume that would work though it would likely be a more complicated setup. I know in the past it suspended power options automatically when using fullscreen, not sure what might have broken and how.

I wish KDE had an option to disable power saving when an application is open and its window is on the screen. Especially since some games don’t suspend it either, even in fullscreen not moving the mouse or pressing any keys for the specified amount of time allows the monitor to turn off.

it would likely be a more complicated setup

Not at all, it can resemble the Default Activity but just have the power management differently, and switching between the two is just Meta+Tab for example.
Yes, you can have then rules for some applications to open strictly in one Activity, but that also is not a big deal to set up.