On Manjaro KDE, I installed Renode framework and it’s giving me this error:

I think I have the module installed as I have /usr/lib/gtk-3.0/modules/libxapp-gtk3-module.so

By the way I also had to install other modules, like appmenu-gtk-module, but this last error i tried everything I found (error seems rare) and nothing worked.

Where should I look? I am a newbie, feel free to suggest any docs I should look at.

Sounds like the package may have missing dependencies. I would create an issue upstream as the AUR package maintainer has included the dependencies the developer lists.

Seems like this might be a more general issue with that module
After updating yesterday I get this error for several (packaged) gtk applications. Up to now I’ve at least found it in:

The package community/xapp is installed - version 2.0.4-1

This might also be the problem for what a user reported here:

It seems that if (e.g. in a terminal), I remove references to xapp in the $GTK_MODULES environment variable, the error message disappears. For example in my case I have:

From this post on the Arch linux wiki I noticed that I have a file:

Which I never created or modified by hand, with this contents:

Not sure if it’s safe to remove that and what impact it could have. Would be good to understand what package created it.

Like they mentioned there, the error should not affect functionality. I wouldn’t worry about it.

Not sure if it’s safe to remove that

No, don’t go messing around with system files.

Would be good to understand what package created it.

Just for the record, since the last update of stable branch [Stable Update] 2020-12-30
I often see such message Failed to load module "xapp-gtk3-module" also with almost every applications (not only GTK apps, but also with QT apps).

I reported on Manjaro’s Gitlab:

I am on the Stable branch. Since the stable update of 2020-12-30 (which included xapp update), as I launch applications from Terminal (can be GTK or QT applications) I get...

Use GTK3_MODULES since gtk2 isn't supported.

I applyed this patch (for myself) and the warning message is gone.

Good point. At first I thought it was a problem with renode-bin itself.

So, now, we’ll have to wait for xapp rebuild 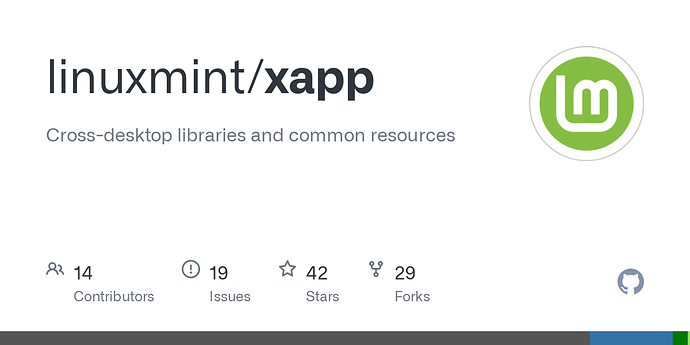 Release master.lmde4: util: add a utility function to convert from a pango font...

3 posts were split to a new topic: Error when trying to launch Instagraph

Has been updated in the unstable branch: xapp-2.0.5-2:
https://us.mirrors.fossho.st/manjaro/unstable/community/x86_64/xapp-2.0.5-2-x86_64.pkg.tar.zst (would be better wait, if your not on the Unstable branch, for avoiding to mix packages of different branches)

BTW it seems that temporarily commenting out all of that file

Solves the problem. It seems to be a file sourced which essentially adds stuff to the environment variable:
$GTK_MODULES

which on my system is now effectively:

(which also sems a bit weird… but that’s another story).

Actually I’m not sure if it’s related but when that error appeared I wasn’t getting notifications with HexChat.

Indeed: I was editing my reply accordingly to the recent update