I have a dual graphics notebook (Razer Blade 2019) to which I connected an external monitor via HDMI. The HDMI port is directly connected to the RTX 2080 graphics card. A while back I installed Manjaro and both monitors were working fine out of the box with the (default) video-hybrid-intel-nvidia-prime driver. Now at some point in the past few weeks (likely due to an update) the external display must have stopped working. Since I didn’t have the external display connected for at least 3 weeks or so, I can’t tell exactly when it happened. Also, to my knowIedge, I didn’t change anything graphics related since then and the display works as soon as I restart and boot into Windows… so the monitor/cable isn’t broken.

I’d be glad if someone could help. I’d just like things to work again since everything was working fine before.

Did you use wayland also before?

To be honest, I don’t know as I have been mainly using my work PC since I installed Manjaro on my personal one.

However, a simple startx from tty3 fixed the problem. So yeah, most likely I haven’t been using Wayland before and somehow it got changed.

I then checked my run/gdm/custom.conf. However, it says:

Wayland shouldn’t even be used then, right? How do I turn it off then?

Wayland shouldn’t even be used then, right? How do I turn it off then?

Yes and this file:

But you use the Intel gpu as main, so this rule is for nvidia gpu as main.

When logging in, there on the bottom right a switch between wayland and xorg. Just choose the second on. It should be xorg then. 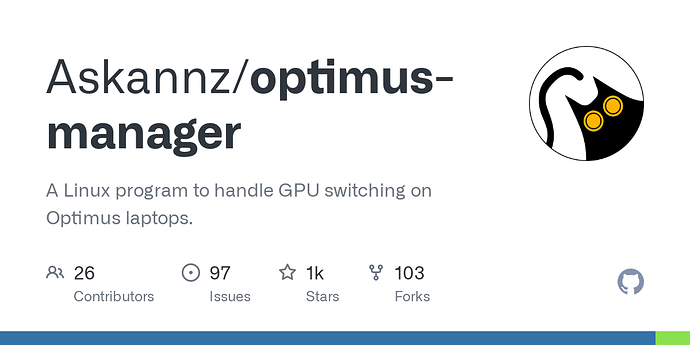 When you install it,make sure to follow the GNOME instrucctions

After that,reboot then switch to nvidia mode for example.

Logout and login again and the external display should work again.

Thanks for these answers.

When logging in, there on the bottom right a switch between wayland and xorg. Just choose the second on. It should be xorg then.

This actually worked. I don’t know why it suddenly defaulted to Wayland then.

According to this post, the following command will tell me my active GPU:

Now, for me it says:

But if only the onboard graphics is active, how does my second monitor now work at all, since the HDMI port is directly connected to the Nvidia card?

Also, what benefit would I get from using optimus-manager over my current situation, now that things are working again after switching to Xorg in GDM?

I think wayland by default deactivate the HDMI port for some reason then,if you type

and there is a Xorg process,then yeah the HDMI port will work,that would explain it,I don’t use wayland so I don’t know how it works with optimus laptops.

Also, what benefit would I get from using optimus-manager over my current situation, now that things are working again after switching to Xorg in GDM?

Without optimus manager you will have a running Xorg process there always consuming energy,although I think with turing nvidia cards have a mechanism to have to power off even when a process is there doing nothing,I don’t know how that works though.

With optimus manager you can switch to integrated and remove the Xorg process there and invoke the nvidia card when you need it,but the HDMI wouldn’t work (at least yet until NVIDIA fix this).

Also there is a bug where if you only use the external display only and the laptop display is powered off,the external display will be lagging alot,for that solution is to switch to nvidia mode in optimus manager,maybe that is something you can consider.

But other than that,no other benefit.

Thanks for explaining. Okay, since currently I’m using my notebook mostly plugged in, I think, as long as these bugs/issues persist, I will keep it that way.