Hi guys!
I have a strange issue…
I have two monitors attached to my PC and naturally I want to use the higher resolution one as my primary and the other as a secondary monitor.
Now, every time i shutdown or reboot my configuration disappears, leaving me with my small monitor as primary and the other as secondary (of course).
The funny thing is that, just after boot my xrandr output is

So plasma recognize which is my primary monitor correctly.
That’s confirmed by giving a look to system settings in display section, where right after boot I see: 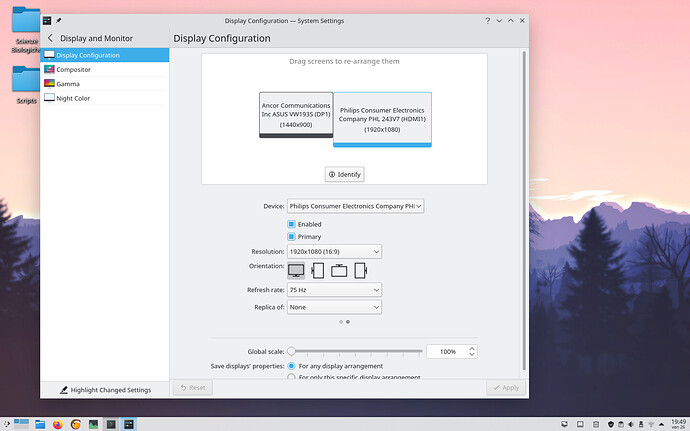 Even though my actual primary monitor is still the small one.

Now, I read that it’s a bug in plasma and it’s been here with us for at least 10 years, so there are a lot of solution on the web, however none of them appllies to my case: for example, I wrote a simple bash script to launch at start:

but it doesn’t work because plasma applies the same settings at boot, even if for some reason it messes up my monitor selection.
What can I do?

So, I checked the mobo manual and BIOS settings and turns out I can’t set a primary monitor via firmware…
Strangely enough the ASUS logo shows up on both screens when I boot, so I don’t know which one is considered primary at that stage.
The only thing I tried that could help is to disconnect one of the two monitor, boot, then shutdown and connect it again to see if that could reset my settings but still nothing.

Regarding the script, no luck with that either… It works if I manually change display settings and then execute the script to test it out, but at boot it doesn’t really make a difference…

Thanks for the ideas though!
Al least we ruled a couple of things out

Regarding the script, no luck with that either… It works if I manually change display settings and then execute the script to test it out, but at boot it doesn’t really make a difference…

I don’t understand what you’re trying to say here. Can you elaborate on all the exact steps you’re performing, please?

I don’t know where you put the script for your startup, but I recommend ~/.config/plasma-workspace/env as that’s where I’ve got mine and it works.

Note that I only wanted it for when I logged into the PC, so it’s not global and will only run after I’ve logged in.

So according to this page:

According to this link .xinitrc in your home directory will be read and executed, otherwise the default /etc/X11/xinit/xinitrc is used. So you should be able to create this file and have the shell script started.

My script it simple:

So from what I’m seeing yours is correct., but maybe uneccesary, so try the following:
Note: I have no idea if this’ll even work.

Assuming your xranr command is correct, append it to /etc/X11/xinit/xinitrc:

NOTE: Once again, I have o idea if this is correct, or wil work.

What I meant to say is that I messed up my monitor settings on purpose and than executed the script to see if it worked and it does.
I did this to be sure I typed it out correctly and tested with the original shebang and the one you suggested.
The problem is that, after shutdown/reboot, my primary monitor is still the wrong one even if xrandr output and system settings say otherwise…

Hi @Mirdarthos!
I tried the command you suggested but still nothing

Well, now you know…if nothing else…because…now I’M the one that’s out of ideas…

Thank you for the clarification.

Does this mean the script doesn’t correct anything after you log on and execute it manually?

Exactly!
That’s why I’m having such a hard time with a somewhat trivial problem…

Are you using a converter or straight HDMI to HDMI or DVI to DVI or DP to DP cables?

Or we’re all going totally bonkers here, or your machine is just crazy.

It just doesn’t make sense, that’s what really bothers me, but I wasted too much time over this…
Let’s hope for a fix in the future, thank you!

Or we’re all going totally bonkers here, or your machine is just crazy. Set the bloody low-res monitor as primary and the high-res as secondary and live with it… Sorry!

I installed XFCE, it’s been a long time coming anyway…
Now everything works as it should!
So yeah… I love KDE from the bottom of my hearth but it was driving me nuts lately

I’ve never had any problems with KDE: it does everything I need and more!

It’s just that is a pain on my desktop, especially managing a dual monitor setup.
But hey, XFCE looks better than I remembered and the important thing to me is that my PCs are powered by Manjaro