Display server not starting or working after driver update

I notice its not starting, so I do CTRL+ALT+F2 and login, type startx but comes up with error. Same error with startxfce4.

I can’t copy/paste it, but if im allowed to post a picture, I will.

the update was fine. rebooted and was even playing games no issues.
what I updated was the nvidia drivers, and thats what broke my system I think.

went to more stable kernel, but still no bite.

here is the error screen when I type startx, just so we’re on the same page. 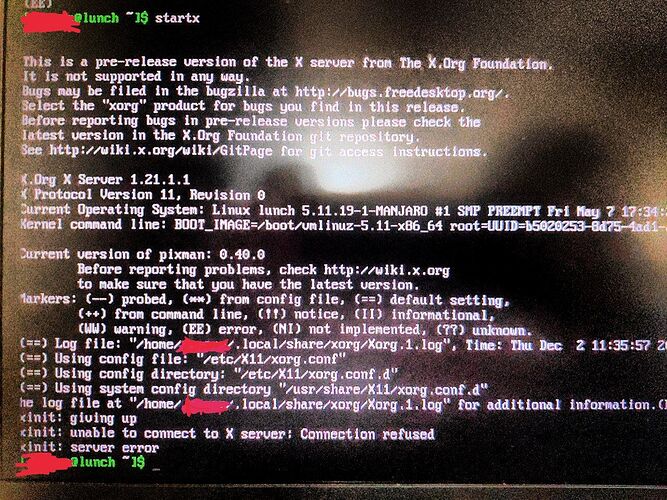 [HowTo] use public command-line pastebin services without installing anything! Tutorials

Sometimes we might want to easily share terminal output. While this can be accomplished directly in the forums or manually through websites like pastebin, there also exist a number of open services that allow you to paste and share directly from the command line by using tools you already have installed. This is great for many situations, including troubleshooting from a non-graphical boot, or simply very large outputs. Here I will share a few examples and how to use them. Services and Exampl…

Kernel 5.11 is long EOL. Either switch to 5.10 or 5.15.
Did you look into Xorg.1.log which is supposed to contain additional information?

read the log, not wanting to cause more issues by trying to trouble shoot in my ignorance - but - I do belive that the lines “failed to initialize NVIDIA kernel module” are the cause.

it says that a few times, then says cant consult the nvidia readme for details, then simply says no devices detected and precedes to closing.

Tried suggested fixes using mhwd but a few comands there come up with an error and aborting. (though Im p.sure that it wouldnt help cos it was an unrelated issue that I was using the fix for)

as you sent this it I am half wayyyy instaling 515 to try just that. tired with all my other kernels before this. will update you with the result in a minute

Indeed, I went to 515 and updated drivers. Was a total show when they installed, but a force restart after 10 mins (to be sure its done), and it worked like* magic *

how might i have known what kernel would support what driver with what card?

Thanks for your help, of course

how might i have known what kernel would support what driver with what card?

Only supported kernels will get updates and will get matching driver packages.
You should follow #announcements:stable-updates, kernels going EOL will be mentioned there.

also lists all currently supported kernels - although (current) nvidia drivers might not be available for the older ones.

linux515 looks to be the next LTS kernel and currently its projected EOL is october 2023. That could very well be extended (like most LTS kernels have been) but we’ll have to wait and see.