Confused about the boot partition

This is not a problem per se, but it confuses me and I think I see this kind of thing for the first time.

Yesterday I installed new Manjaro Xfce installation on disk sda1. There were also previous installations of Manjaro present on this laptop, namely on sda2 and sda4. I distinctly remember that I installed this latest OS on sda1 because it used to be ntfs and I formatted it as ext4 for Manjaro.

While the OS is booting, it writes that it is booting from sda1. However, if I type sfdisk -l in terminal, it shows sda4 as the current boot partition:

Gparted also shows that sda4 is the boot partition: 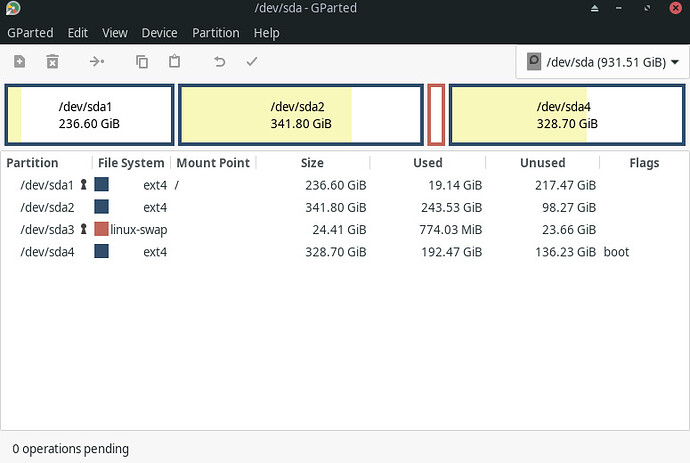 Interestingly, Gparted says that sda4 is not mounted. So how can an unmounted partition be the one from which the current OS is booted? Could someone please clarify this for me?

What you see is only the Boot flag which does not matter at all for BIOS boots by grub (using msdos parted disk). This is only relevant for Windoze BIOS installations. So everything is fine. You could assign the boot flag to whatever partition - it does not chang anything in your case.

GNU GRUB (short for GNU GRand Unified Bootloader, commonly referred to as GRUB) is a boot loader package from the GNU Project. GRUB is the reference implementation of the Free Software Foundation's Multiboot Specification, which provides a user the choice to boot one of multiple operating systems installed on a computer or select a specific kernel configuration available on a particular operating system's partitions. GNU GRUB was developed from a package called the Grand Unified Bootloader (a ...