Apologies, prior to Manjaro-i3 I have only used official versions like XFCE. So I’m not sure how often community-editions update.

I ran sudo pacman -Syu today and saw there was a release today. I went to check the announcements and it says Manjaro community-editions 21.0.2 is the latest community-edition update. The 21.0.3 release appears to only be for official editions so far. I’m confused, as I already have 21.0.2 installed as seen in this image: 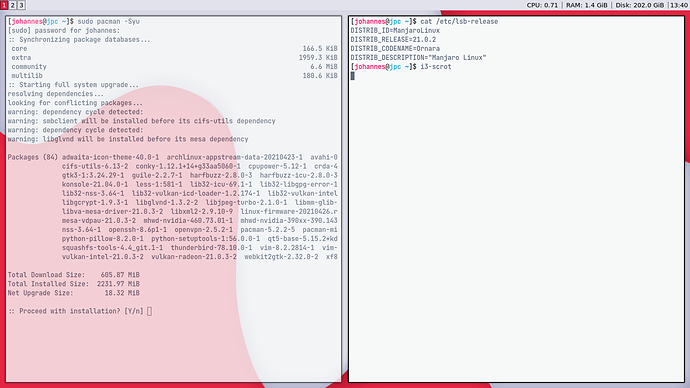 So what’s being updated if I already have 21.0.2? A bit confused here.

lsb-release file is for all edition, today we have all 21.0.3
connunity iso is after
As with xfce, this number does not matter to us : After update, we have the iso configuration installed and not the last one in lsb_release

So I’m not sure how often community-editions update.

Community Edition ISO updates whenever the developer of the ISO profile wants to / have time to update it.

After installation of the ISO, all packages updates just like any other editions of Manjaro because they all use the same mirrors.

You can ignore release version numbers really after installation… it isn’t that important in a rolling release. Version number releases are more important for the ISO itself, to know what is in that ISO version.