Hey so this is my first post here. I’m 20+ years in the film and television industry and have recently cancelled all Microsoft and Adobe stuff - it feels great!! The learning curve is steep but I’m enjoying it.

I finally have Davinci Resolve, Blender, GIMP and Audacity up and working but now I seem to have run into a problem that I hope is trivial…

I have looked at the system keyboard shortcuts and gone through every single one…even finding the one that seems to be the problem and cancelling it, but the shortcut still persists when in Blender (Alt+Middle Mouse is another one).

Has anyone else ever run into this?

Any clues to solve this would be amazing, thank you.

Application shortcuts are not shared with System Shortcuts and viceversa, but yes, is possible if one shortcut is the same on both but doing something else, one is to be triggered before the other. In most cases System Shortcuts will get triggered first. Once you find those inconvenient shortcuts, and disable them, i think a restart of the session is required in order to take effect.

Hey thanks man, appreciate the response. Problem is, I did find the system shortcuts and changed them / disabled them but even after a restart the problem persists. I did read on a GNOME forum that someone suggested using dconf-editor…does that seem like a good idea to you / do you know what they mean?

I didn’t test in quite some time the Cinnamon ISO. For an art production linux machine i prefer either Gnome or KDE Plasma as DEs. Since Cinnamon inherits a lot from Gnome, the dconf-editor might help, but that should be the same as using the Settings > Keyboard > Shortcuts and tweak them from there, as described and showcased here:
https://www.addictivetips.com/ubuntu-linux-tips/customize-keyboard-shortcuts-on-cinnamon/

There is also a cheat-sheets that even tho is made for Linux Mint, i’m sure in most part is the same on Manjaro. It might help to understand the logic and where to look then personalize them for your workflow. 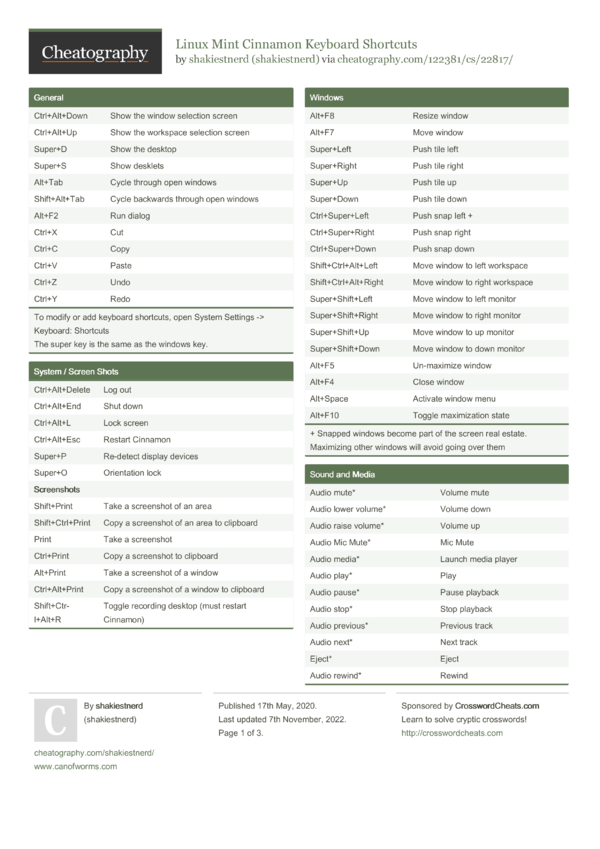 Thank you so much!! I’ll let you know how I go

Okay, so the Alt+Middle Mouse Button shortcut (or Alt+Left click) doesn’t even exist in any one of the options found Settings > Keyboard > Shortcuts (I went through every one) to change or unassign - or if it was there, when changed to unassigned, it had no affect on what is happening.

In other words, it seems impossible to be able to use these shortcuts in Blender because they are locked to the system. Seems odd to me…I’ve spent so much time learning Manjaro and getting the software mentioned in the 1st post to actually work, it will be painful to try another distro and start over.

Anyway, thanks again for helping.
Matt

One thing you could still try, is disable the Moving and Resizing Windows behavior for the Special Key and either set it to Disabled or change it to Mod (Windows) Key …

Hey guys, thanks again for the support (I reckon that’s it @bogdancovaciu !!).
I ended up going KDE instead of Cinnamon and all is well. In fact, I like it better. Learned some things along the way so worth it! Cheers