I was surprised to see the CSD in Chrome, instead SSD (titlebar) generated by kwin. I checked the settings, and they stayed the same. Turning them on or off doesn’t change anything, unlike earlier, where it was turning titlebar on/off.

Is it just the issue on my side, or something general?

EDIT: Found on AUR page that disabling flag use-ozone-platform in chrome://flags helps.
It turned out to be a workaround, because it disables the CSD feature completely, so it forces SSD titlebar anyway. It works for me, but is not an end solution, where the feature should work as before. 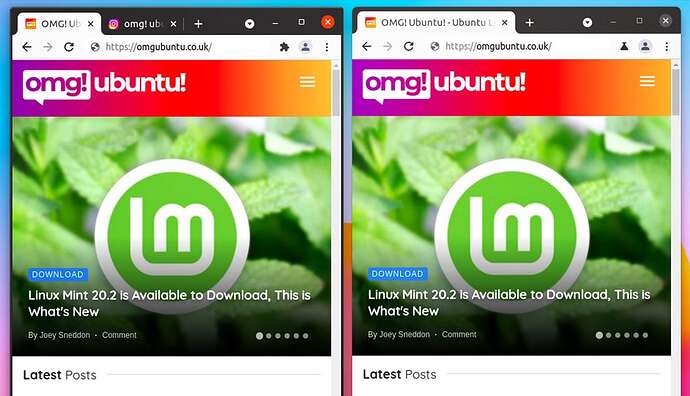 Latest versions of Google Chrome for Linux fix several of the browser's CSD issues. In this post we compare the builds side-by-side to spot the changes.

It always supported it

Looks like the only change is that they broke the CSD/SSD switcher, and now it forces CSD despite if it’s on or off.

As the article says, it now supports CSD properly; at least for GTK.

Disabling ozone is not a viable long-term solution because ozone is Chromium’s new graphics platform on Linux. The old platform will be removed in a release in the near future.

Edit: Has anyone reported this to bugs.chromium.org?

As the article says, it now supports CSD properly; at least for GTK.

True, but the issue showed up this week, while this proper CSD solution showed at least a month earlier, so the bug must be recent.

Edit: Has anyone reported this to bugs.chromium.org?

No, not so far. Maybe when I find time, but that’s always a problem. But first, I would have to install Chromium to see if the bug happens there as well. If not, then maybe it’s Arch’s compilation issue?

OK, I checked chromium and…

So yeah, it looks like the source of a bug is Chromium itself.
Since there are many Plasma users, someone had to submit that bug already, at least that is what I suspect. However, I couldn’t find anything related.

OK, I submitted the bug: