Change output device from terminal on the fly?

Is there a way to change output audio devices on the fly?
I want to achive the same effect of going to the System Tray, click audio icon and select device.
I tried with pacmd set-default-sink index but it only showed a pop-up saying the audio output name.
Thank you.

you could create a keyboard shortcut, you don’t say what desktop your using, so you’ll have to google.

I’m using KDE plasma, I actually googled a lot and tried to mess with the pacmd command, with no results

did you go into the menu & type keyboard, should pop right up.
then just create the command.

some apps have to be restarted to use the new settings. they only detect when opened, not while running.

But if I change the device with the icon in the system tray, the audio output switch right away, even if I don’t restart the app

it’s been awhile since i’ve messed with that stuff, check the man pages. 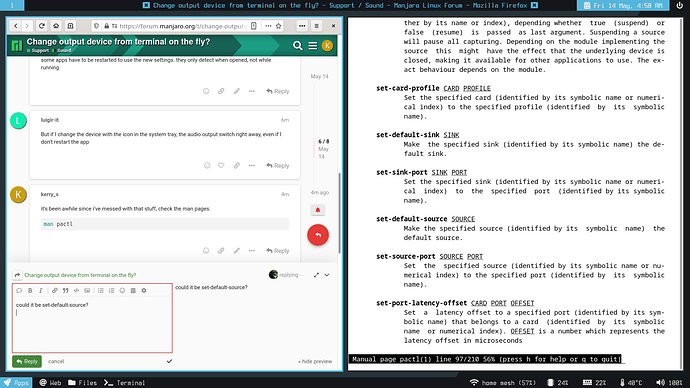 and use this command to move the streams

lol, he’s going to have to script it, then tie the keyboard shortcut to script.

EDIT: after reboot, I tried again and this time worked, thank you

So, to anyone intrested in, I made a small script that chages the default audio output device and move all the current audio streams to the new output.

To see the desidered_output, type pactl list short sinks and pick the index or the name.
If you want to set a keyboard shortcut, use the name, since the index can change when rebooting.