Hey all, you guys must be familiar with this “issue”, I mean, some people use the caps lock to capitalize the first letter of a word, mostly the ones coming from Windows, but in Manjaro we have this so called “delay”, which causes this effect “CAps LOck” when typing something really quick, though I know there is a workaround for XORG users, I can’t find anything for Wayland users. Any ideas?

some most people use the

to capitalize the first letter of a word

I know there is a workaround for XORG

I’ve really tried to get used to using Shift, but I just can’t, it slows down my typing, that’s why I wish there was a way to change the caps lock behavior.

Answering your question, there’s a post here on the forum, which the title is: Incorrect CAPS LOCK key behavior? [Rant/Tutorial]. The solution in the post works on Xorg, but not in Wayland. 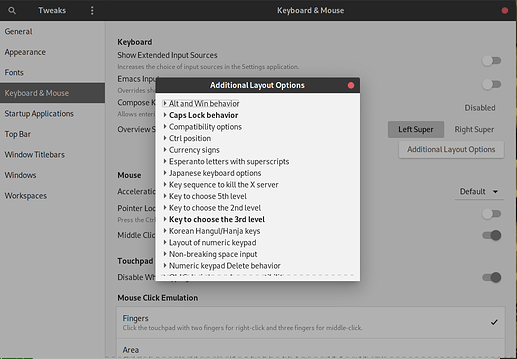 I know there is a workaround for XORG

Hello, everyone! I’ve finally found the solution, here’s how it goes:

Since the fastest way to change a key behavior on Wayland were through “Additional Layout Options”, I’ve changed one of the options for Caps Lock behavior, the one I chose was “make Caps Lock an additional Ctrl”. All you have to do is, go to “usr/share/X11/xkb/symbols/” and edit the file “capslock” (make a backup before this), then find the behavior called “ctrl_modifier”, it should look like this:

now replace it with this:

Save it and then go to “Gnome Tweaks” and activate the option “make Caps Lock an additional Ctrl” on “Additional Layout Options - Caps Lock behavior”.

Now your caps lock should be working with no delay!

P.S: I’ve tried to add a rule instead of replacing one, but it didn’t work, you could try if you don’t want to change anything.