Can't open RAW photos in GIMP even with Darktable instaled

I try to open a ARW (Sony’s RAW file), and before, it used to open darktable to reveal it and then i could edit it with GIMP, but now it appears this mistake: 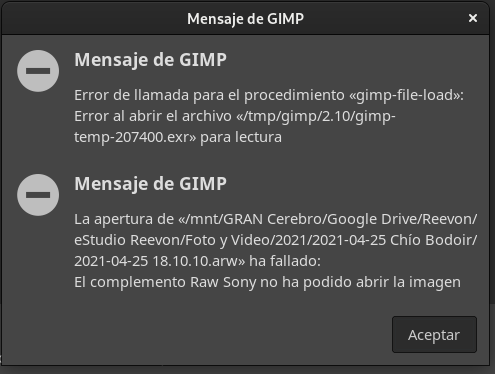 Any ideas? thank you.

PS: this appears in the settings of gimp: 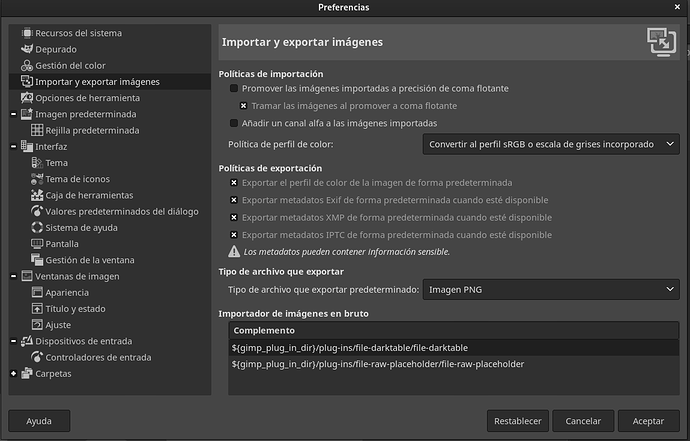 Open is for GIMP xcf file, while Import is for non-xcf file like png. Probably you need to use Import to import RAW image.

But i used to just drag and drop and automatically opened the darktable, and when i closed it, it would open it in GIMP, with older versions, and what you tell me is with the experimental version? i mean, the 2.99.xx? if you do, how do i install it in manjaro? cause it won’t appear in the programs app :S

The Open and Import features have been since GIMP 2.8x I think … don’t remember much. So the stable repository should at least support this or newer GIMP version.

But I don’t know the drag and drop feature, or the darktable integration with GIMP. So can’t say much on this.

, unless it’s in other place, but if you can check it would be awesome.

I use gimp-nufraw plugin for importing Canon .crw files to GIMP. The plugin appears to recognise a number of proprietary filetypes including Sony .arw files

Hmmm … now that I upgrade to 2.10, it seems the Import and Open are merged together. I see that Export and Save are still separated though. So I guess 2.10 goes back to pre 2.8 when Open could open any GIMP supported files.

But I can’t guarantee that GIMP is able to understand RAW image. I never try it. Probably there’s a need for a specific plug-in for a certain camera model as RAW is specific to a camera.

Thank you, but i’d like to continue sing darktable, it used to work

Precisely, just as Photoshop with Raw Camera, GIMP uses darktable (or rawtherapee or other options), but don’t know why it’s not working

don’t know why shows that error

But i used to just drag and drop and automatically opened the darktable, and when i closed it, it would open it in GIMP

If I remember well, DarkTable needs a lua script named “gimp.lua” in order to export the open image to Gimp. And once Gimp saved the image, the script would create another instance in your working picture, and automatically imported in DarkTable. Did you check this Darktable script ?

Well, thanks everyone for the help, what i did was to install the development version 2.99.10 and saw that it worked there, then reinstalled the actual version 2.10.30 and now it works…so, i don’t know what happened, but that helped, thanks